I’ve been a fan of DD-WRT for some time, a Linksys WRT54GL is the heart of my home network. While I don’t have an immediate need for a new router, I’ve been thinking for some time that I should pick up a reasonable backup in case the WRT54GL fails. There are also some really interesting projects you can do with a modified router, and having a spare will let me tinker with some of those.

I came across a good deal on a refurbished Netgear WNR3500L, it was about half the price of a new unit. This was too tempting: N networking (I don’t really need it, but why not stay current?), gigabit wired networking (a must have), USB port (I wanted this for expansion options), but the feature that really sold me was 64MB RAM and 8MB ROM – more than enough for DD-WRT with all the features.

This particular router is also supported by Tomato another very popular firmware. There is also a somewhat suspect Netgear sponsored open firmware, the site seems to have instructions for installing an older version of Tomato – personally I’d steer clear of this. Unfortunately the other popular router firmware OpenWRT doesn’t currently support this router. Of course, I prefer DD-WRT which does support this router.

One of the reasons that I blog is to have a record of what I did, far too often I end up needing to do something again, or refer back when I’m doing an upgrade. Another reason is to help me get organized to do some of these things – finding the instructions is usually easy, understanding them and what you’re about to do takes some time. I probably spent 2hrs reading through forums and searching various things before I leapt in to flash the router, I strongly recommend you do the same. Also this write-up skips over some of the frustrating head scratching I do when things don’t work, that’s part of the learning process.

There is a v2 of this router, and v2 is NOT supported by DD-WRT. Apparently the boxes they come in are identical, but the router itself has a v2 marking. I did find a wiki that documents the v1 and the v2, I was able to match the FCC numbers listed to confirm I had a v1. For what it’s worth, my stock firmware was V1.0.2.50_31.1.25NA.

The DD-WRT site has some excellent instructions on doing the installation, I’ll avoid repeating those but will document the steps I took. I will repeat some of the cautions from the site:

Before we get started, let’s talk about the 30/30/30 reset. Yes, it’s over the top and very conservative. Weigh those 90 seconds against the potential problems you might run into trying to by rushing through this, sure building a JTAG connector to resurrect a bricked router might be interesting but it’s going to take you a lot more than 90 seconds.

I primarily use Chrome, but have experienced problems with DD-WRT and Chrome in the past. It turns out this time that FireFox was unable to configure the router (but it did handle the firmware install just fine). Consider this a caution, if you’re having trouble with this process it might be your browser. 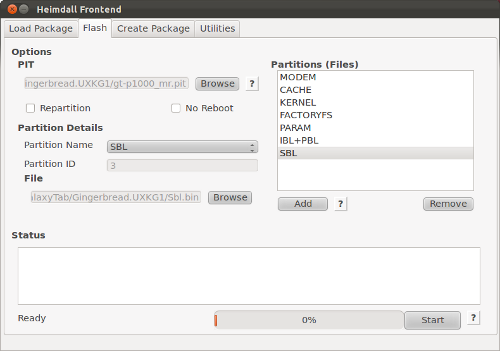 When I got my Galaxy Tab 7″ one of the first things I did was to see if I could collect the stock firmware in a format that was useful in case I ever wanted to restore the tablet back to it’s stock form. It turned out that the 2.2 based firmware was not easily available on the net, and neither was the 2.3 version.

The results of my work are captured in an XDA thread, but restoring from those captures was an exercise left to the reader. The 2.2 (froyo) image is captured directly from the device, I first rooted the tablet with SuperOneClick then used rotobackup to capture a heimdall friendly set of files for flashing. The original work was tracked in another XDA thread where you can read the blow by blow if you’re interested. For 2.3 (gingerbread) I was able to grab the intermediate files from Kies during the normal upgrade process – the rest of this post will talk about how to use those files to restore the P1000R to a stock 2.3 state.

I’m using heimdall version 1.3.1 on Linux, but other versions and platforms should work fine. I particularly like using Linux to flash the GalaxyTab as it doesn’t suffer the same driver madness that Windows seems to have, USB devices just work. I’ll assume you can find the download and extract the files.

You’ll want to specify the PIT file – gt-p1000_mr.pit, it’s safe to select the repartition box as we’ll be doing the full monty here [sharp eyed readers will notice that the picture at the top of this post doesn’t have the box checked, that’s a mistake on my part – go ahead and check it]. The files map to the heimdall partition names as follows:

So click on the Add button and specify the partition type and files from the downloaded and extracted ROM.

Next you need to get your device into download mode. My preferred approach is to hold the power+volume down buttons until the download screen appears (yellow triangle with android digging). Now you can click start on heimdall.

Under Linux at least , this will hit 100% and then fail to reboot. That’s ok. Wait a minute or two to make sure it’s really done, then force it to reboot into recovery mode by holding power+volume up until you see the recovery screen.

Assuming the flash has gone well, the stock recovery will start up and automatically try to install some updates. You should see:

Don’t panic. Remember that this update was expecting to have come from a properly installed 2.2 stock, we’re leaping into the middle of the process.

Using the recovery menus, select ‘factory reset + wipe data’ followed by ‘wipe cache’. One hint for those not used to the stock recovery image, the capacitive home button is used to select entries and volume up/down for navigation.

Now you can reboot. The first boot will take a while as it sorts things out and rebuilds the cache(s).  All should go well and you’ll be greeted by the stock home screen.

There are many different ways to take some video on Ubuntu and convert it to a physical DVD that will play back on most DVD players and while the command line would be fine, it’s certainly nice to see there is at least one option that provides a reasonable GUI and supports the creation of menus.

I tried DeVeDe before coming across Bombono. I was trying to take a number of 15 and 30 minute recorded children’s shows stored as mp4’s and convert them into a playable DVD. For some reason DeVeDe aborted with little to no diagnostic information after a couple of videos, it was easier to move on than mess with it.

Bombono was able to convert all of my videos, but the version available in the Ubuntu repository was older and had some serious issues related to menu editing. It turns out there is a PPA that is current (1.2.1), instructions for installing via the PPA are hosted on the bombono wiki. I expect in future the Ubuntu repository version will catch up and be the easiest way to get this utility, but in the near future I recommend getting it from the PPA.

The PPA install places things in the /opt/bombono-dvd-testing hierarchy, which is fine but it doesn’t provide an easy way to run it. I added a link in /usr/local/bin so that I can launch it from the command line

It does appear that there is a .desktop file in /opt/bombono-dvd-testing/share/applications so a little creativity and I’m sure you could easily integrate it into the Ubuntu menu system.

The 1.2.1 version (via the PPA) has quite nice menu editing. I wouldn’t claim this is the same level you’d expect on a Mac, but it very easy to use. One of the more polished utilities I’ve seen on Linux. Menus support background images and buttons that can be stills or motion video clips. I did experience problems trying to use too many motion clips on a single menu (it rendered most of them as stills), it may be possible to work around this by generating the DVD folder then manually adding the appropriate video clips. The alignment and snap to grid tools are handy for making the menu line up.

You of course can choose to create a DVD without a menu. Simply omit any menu and the DVD will play the video when the disk is inserted.

Before you get going with Bombono, make sure you use the Project menu and select Preferences, you’ll want to choose NTSC or PAL as appropriate and choose how many cores for it to use.

The size estimation is terrible, a 4.4GB estimate (with warning it wouldn’t fit) resulted in 3.3GB iso. This is a bit frustrating if you’re trying to maximize the quality of a full length movie on a single layer DVD (then again, if you’re burning a 2hr movie to a single layer DVD you’ve already made a number of compromises). There is an option to create dual layer DVDs, but I didn’t try this out. It appears to create 16:9 animorphic DVDs just fine, but either mixed 4:3 content (or possibly 4:3 content in general) ends up stretched.

I’ll include a reference to the forum, but it does seem fairly quiet there.