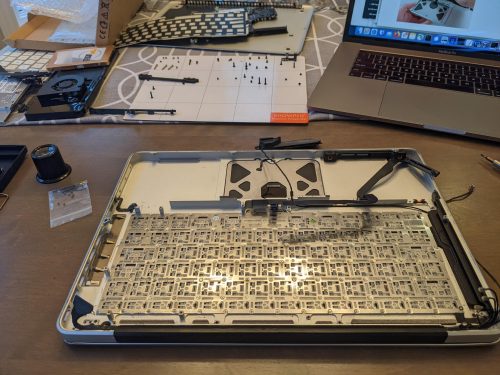 Around 2015 we bought a used Macbook Pro for home use. It was replacing an iMac all in one that had a bad power supply. I didn’t realize it at the time, but it was a real powerhouse of a machine if you look at the specs.

Over time it was clear that older mac wasn’t keeping up. I had done a few upgrades that helped extend it’s life. I’d put in 16GB of RAM – very worth the money. I also later swapped in an inexpensive 480GB SSD. The USB ports got wiggly over time and the keyboard slowly started to fail.

By 2020 it was well past time to replace it, which I did with a Macbook Air M1 (base). Of course I still hung onto the old machine which still worked, but was paired with a bluetooth keyboard. I finally got around to ordering a replacement keyboard from Amazon – a Padarsey.

Of course one of the first places I go for help is iFixit. Unfortunately the repair section for this laptop doesn’t seem to include a keyboard replacment. I used the upper case disassembly instructions and they were close enough and helpful. The keyboard is hidden underneath everything, so you have to take almost everything apart to replace it.

Annoyingly there are three different types of screwdrivers you’ll need: phillips, torx, and tri-wing. I’m really happy with the Kingsdun 60-in-1 set I got recently. It’s got lots of sizes and it’s bailed me out a few times. The bits are not the highest quality, but having the right shape and size makes things possible.

I ended up re-using the existing keyboard screws (there were so many of them!) instead of the ones that came with the new keyboard. I was also grateful for my magnetic mat which helped keep all of the screws organized. Re-using the back-light wasn’t difficult at all.

It was with relief that I saw the system boot up right way after I’d re-assembled it. There are a lot of little bits to get right. It was an epic repair and I’m not sure I’d rush to do it again. Now with a fully working keyboard it’ll continue to get some light use as a secondary machine.

I’m a terrible digital hoarder. I have email archives that reach back years. I have multiple copies of my digital photos. I even have at least partial copies of old machine installs going back years. Heck, it’s just bits and storage is cheap.

This translates a little bit into the physical world, but at least for this post I’ll focus on cool technology that I’ve bought and just can’t let go.

First up is the SLIM Devices Squeezebox. At the time this was a ~$400 device, and while I’d already digitized a lot of our music from CD to MP3 this opened up a novel way to explore our music collection.

The remote was useful, but where things really got neat was the web browser interface to the music server where you could queue up songs as you ‘discovered’ them. This was a neat audiophile device supporting digital out so you could connect this into your HiFi gear. There was even FLAC support if you wanted to go that path. 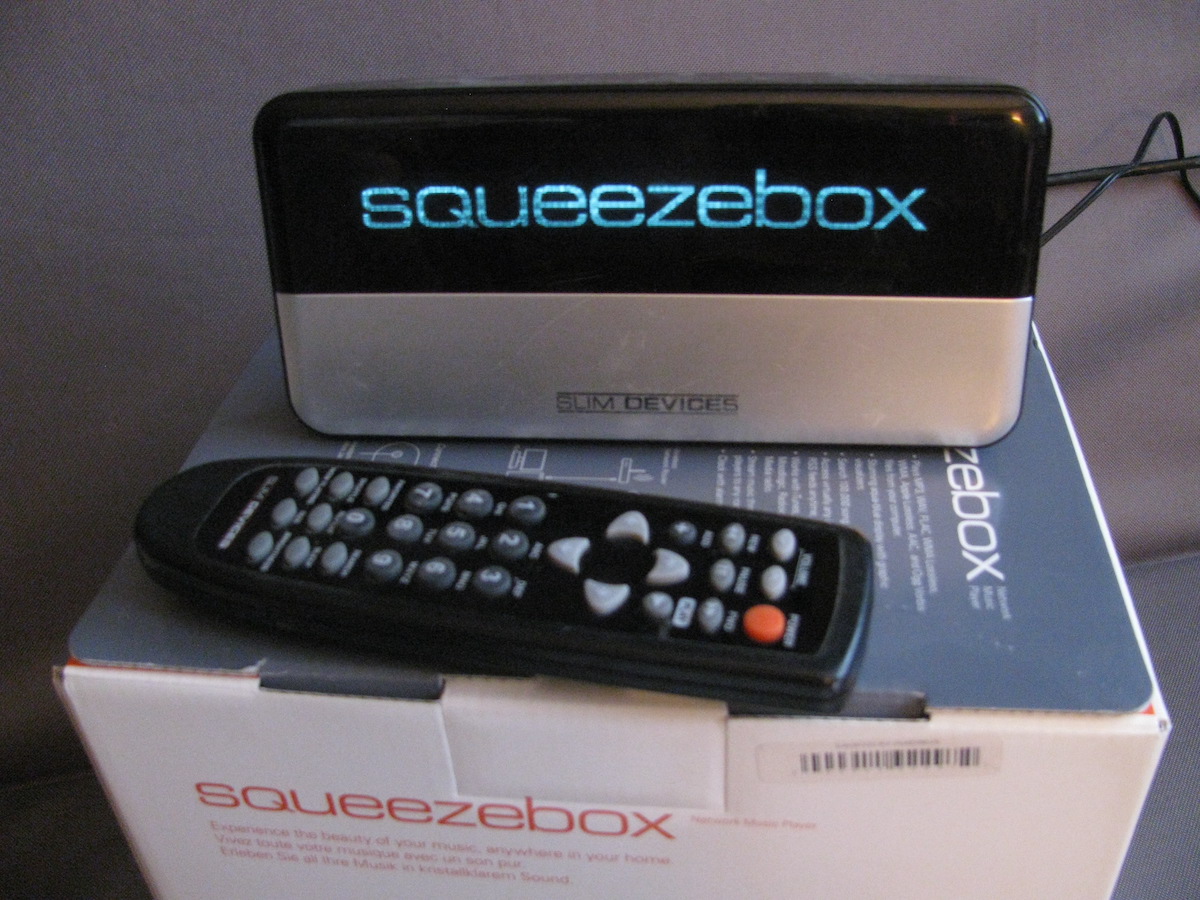 I can imagine a few futures where a device like this would survive if it had something like Plex supporting it. Today I still have my digital music collection, but it’s served up by Plex and we use the various Plex apps and supported devices to listen to it – including an Ikea Sonos speaker.

The second device is the Acer AspireOne. This was also around ~$400 when it came out, which was a ground breaking price point for a laptop. Sure this was a tiny 8.9″ screen, but it had everything we’ve come to assume a Chromebook can do. It was branded a Netbook, a category that died when Chromebooks came out. 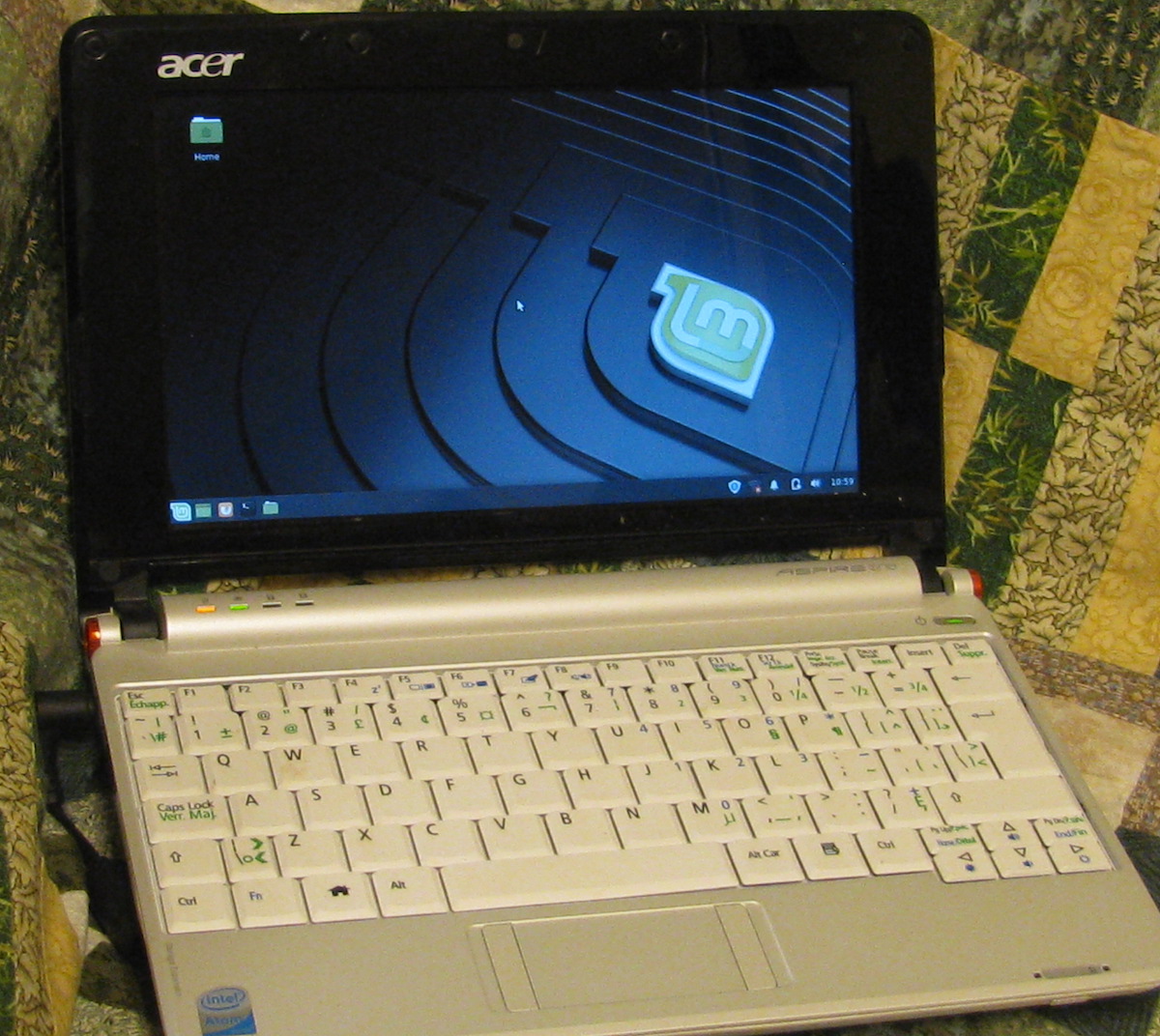 For a while, this was used as Jenn’s primary device. It had access to email, could surf the web and even had a webcam and mic for recording video. (this was before we had ubiquitous video meeting software). It even supported local document editing via early versions of what we know as LibreOffice now.

It was replaced with a mac mini ages ago, which in turn was replaced.. I kept this little laptop around. The original software was a special Linux build that was really pretty horrible, but as this was just a standard intel based machine it would accept a lot of the usual Linux distros.

At one point I even managed to squeeze neverware onto this to make it into a very low end Chromebook. It worked, but was barely capable of doing some of the heavier web workloads that are pervasive on the modern web.

My primary use for this was a hackable Linux laptop that would let me do stuff like reconfigure routers. It’s built in ethernet jack was great for this and meant that I didn’t have to crawl behind my desktop machine to mess with the network.  Sadly the battery on this gave up and it needs to be wall powered, limiting it’s usefulness in terms of portability.

I’ll miss having it, but I’ve since gotten my hands on a 14″ HP Chromebook that I unlocked and installed Linux on, specifically GalluimOS. This has become my go-to portable Linux hack machine. The battery on this isn’t great, but it’ll still run an hour or so. Plenty of time for my needs.

Well, farewell to these devices. I’m glad that they didn’t hit the landfill as I was able to sell them on Kijiji for a couple of bucks. The squeezebox went for $20, very quickly I’ll add. The netbook for $10, which for a working laptop is some unbelievable price apparently. While that is horrible depreciation, at least someone is going to use them for something which has value to me.

“rusty chains” by Creativity103 is licensed under CC BY 2.0

I’m a horrible abuser of browser tabs, often having many many windows with many many tabs. Until recently I was using The Great Suspender to help cut back some of the memory usage – but using any browser extension is a security risk. You’re allowing random code to run within the context of the browser window, giving it potential access to all the things your browser can do – or that you do with the browser.

While I also use a RSS feed reader, I still often come across some article or start down some path of investigation and want to come back to it so I’ll leave it open. I’ve had tabs open for a year or more, I keep them across reboots and have even gone back into my Chrome history to dig out ones that were closed by accidental reboot/restart. It’s a problem.

Today is housecleaning day – let’s dump some links that I keep meaning to look at and have been eating up system resources.

Amazing how many windows / tabs I had been dragging around, my browser load seems much better now. These also experienced some bit rot since I remember having other tabs which I’d obviously accidentally closed and were part of the group of things I was looking at in the context.