Well, it was time for a new RSS feed reader – and FreshRSS was the best choice for me. The kind folk at linuxserver.io maintain a container for it, and it fits nicely into my nginx setup.

Moving to a new tool for anything will have an adjustment period, it would be nice if the user experience was identical – but there is also something to be said about trying new things. Different isn’t always bad, change can be for the better.

Setting it up on a basic linux install looks simple, but I would suggest that adopting a container version is even easier. FreshRSS bootstraps and has a guided setup for first run (first connect on the web). You can even pick a sqlite database and avoid any database setup. It supports OPML import, which many other RSS feed readers support as well – so getting your feeds in or out of FreshRSS is easy.

My initial kick the tires install, I use the no-database required sqlite configuration. This worked well, but as I already run MySQL for my wordpress installs, why not use the same data store?

This is very easy – and the MySQL is also running in a container. The linux install covers how to setup your database, but as I’m using a container version I need to make one change to the setup – because ‘localhost’ isn’t the source of the network traffic to the container. (this is the use of ‘%’ instead of ‘localhost’ as shown below)

While allowing access from any host is a bit security scary, the container is already isolated to a private network so I’ve got layers of protection already.

During the web first run setup you have to then configure the database appropriately. 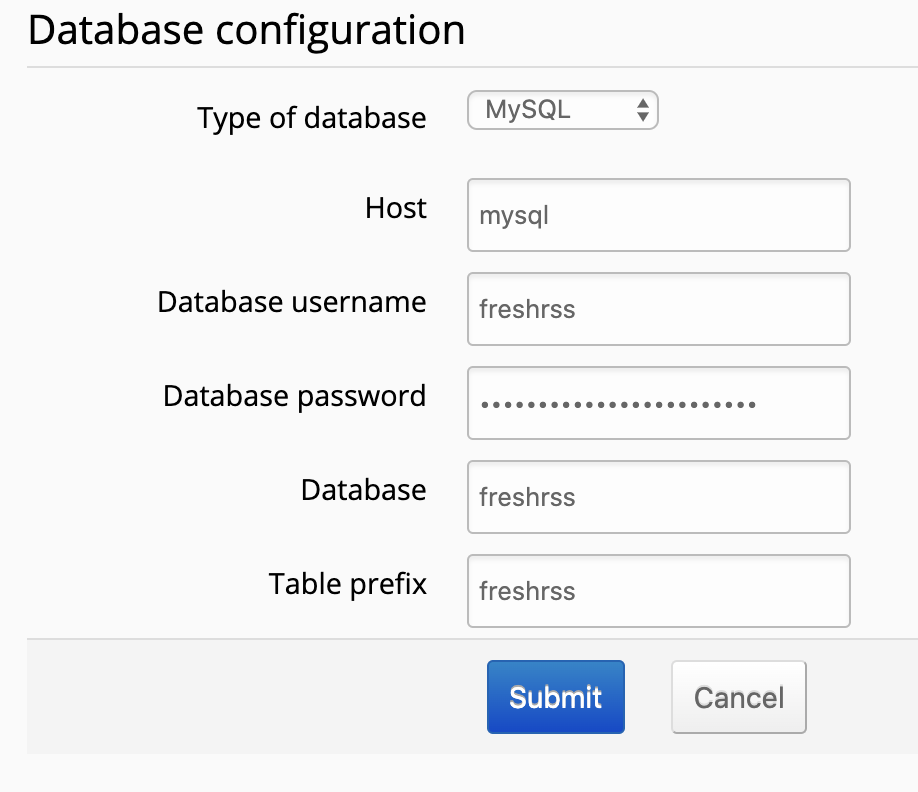 That’s probably the most complicated part of the setup. Now it’s just a matter of creating a user, and importing the OPML of my feeds and away I go.

Of course the new FreshRSS is going to ‘discover’ loads of new unread articles I’ve already read – and also for feeds I’ve been ignoring, not load enough unread articles. Oh well. So for a short while I run both – marking large chunks of articles as read in the new system, and burning down ones that were missed by the new system in the old one. It’s a one time hit and it gives me a chance to tweak some of the user setup configuration.

I’m only a day or so into using FreshRSS – but I’m adapting quickly to the differences. I will shout out to the Android app FeedMe which supports FreshRSS very nicely, once you enable the mobile API.

I will say that the themes are quite nice, I’m still getting use to the layout differences between it and the previous reader I was using. No regrets in making the switch to FreshRSS.