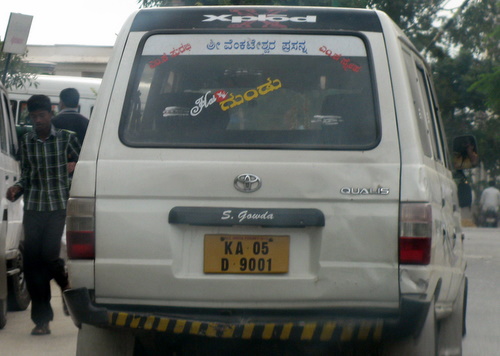 Recently I did some business travel to India.  My day to day work at IBM is with a global team, and a fair number of them are located in India.  I’ve spent the last 2+ years working over the phone with a number of people from the IBM lab there and the opportunity came around to go there in person, so there I was.

Let me lead in with a few travel tips.  For countries like India or Mexico (and a fair list of others) it is a good idea to get the appropriate travel vaccinations.  The City of Ottawa lists a number of travel clinics, I used the one on Centrepointe which happens to be next to the Eclipse office.  I’ve heard mixed reviews about the taste and side-effects of Dukoral – I was fortunate to have zero side effects.  I was a day late taking it, and upon reading the instructions I realized that I could have taken it literally weeks before the trip and still had fair protection.  (lesson here, read the instructions when you get them)

The flight can cost as little as $1500, my ticket was more than that due to the dates I was flying – but I still flew coach / economy the whole way. I left Friday night, returned one week later Saturday evening. The travel was long: 8 hours to Frankfurt with a 5+ hour layover followed by another 8 hour flight, literally 24hrs door to door. At a bit over 6 feet, I barely fit in economy seats (about and inch to spare in front of my knees) – I’m so glad I’m not a few inches taller.

If you are doing a flight like this, consider the portable electronics you are taking with you.  In Frankfurt you’ll be challenged to find an outlet in the airport and it is not going to accept a north american plug. India similarly will likely not have compatible plugs. Bring your adapters. Every gadget I brought could charge via USB, and my laptop is quite happy with 220v input if I can simply plug in somewhere (cheap adapter required). It turned out that in my hotel rooms in India, generally there was one outlet that would accept the 2 prong plug but don’t count on it.

Flying Air Canada / Lufthansa, the Canada to Germany leg was reasonably nice.  Seat back personal entertainment systems. The Germany to India was an older plane, still using shared CRT screens. On my return trip, the Air Canada seat back system was acting up and I only made it through one movie before it became useless. Thank goodness I have movies on my phone.

One of the things many people have pointed out is the traffic in India is quite something. By travelling on off peak hours and staying at hotels close to where I needed to be I avoided the worst traffic. There is no lane discipline, it is quite normal to be driving down the road with the car straddling the dashed line – and traffic lights are just a packing exercise to see how many cars can fit in how small a space. It is quite similar to how people drive in Canada in the parking lots after hockey games – same chaos.  The picture at the top of this post amuses me, many of the license plates start with ‘kaos’ – the KA coming from Kannada. 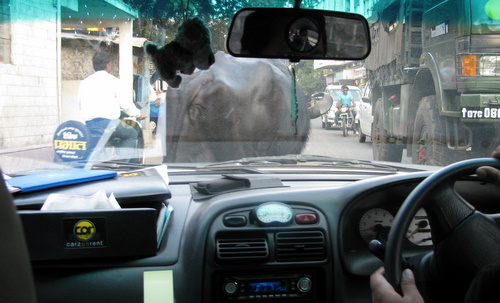 You’ll also encounter a wide variety of vehicles on the road. Many two wheelers as they are cheap and more agile in the traffic conditions they have. We passed a steam roller on the highway that was nearly going at highway speeds. In town we ran into a group of water buffalo who decide it was time to cross the street – mixed right in with the traffic.

The most exciting driving had to be the U-turns. Many roads have concrete dividers preventing turns of any form, so you’d often have to go a fair ways to find the first place you could double back. The strategy for making a U-turn was wait for some oncoming traffic that was smaller than you, then pull out with enough time for them to stop. You’d inch your way around until you had blocked enough traffic to complete your maneuver.

I was warned away from eating anything that wasn’t well cooked, and to only drink from bottles that were uncapped in front of me. This limited my diet during the week I was there, but meant I avoided getting sick. We ate a lot of Indian food, and it was all excellent. Restaurants were not at all afraid to put a little kick in the dishes.

The biggest surprise for me was how friendly the people there were. The best comparison I can make is to the folks on the east coast of Canada. I spoke at a conference, and at lunch I had a number of informal discussions with people. Many of the people there treated me like an old friend, yet these were customers who were there to hear me (and others) speak.

English is spoken by many in India, and signs are also generally in English as well. There were a few experiences where the language barrier came into play (trying to buy coffee at CCD), but these were few and far between.

Similar to Mexico, the gap between rich and poor is huge.  There are also scanners and extra security at every hotel and most businesses, I believe this is due to the Mumbai attacks in 2008. It is these sorts of things that make me glad I’m only visiting – Canada might be boring, but it’s home.

Back nearly 2 years ago I wrote about the lack of “free” wifi at the Ottawa airport, I was pleased to find out they now offer free wifi. I’m not opposed to paying for wifi access, but most of the providers charge more than I’m willing to pay.  If it’s not free then I think theStarbucks model of buy something (a coffee card) and get access is a great way to go. 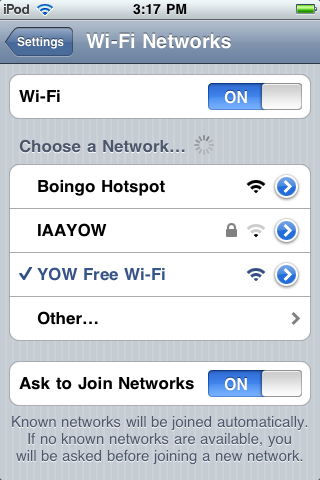 As you can see from the image, there is still an optional pay service at YOW – but the free one is clearly marked.  I ran a quick speedtest that showed 186kbps down / 26kbps up – not very fast but I don’t expect much for free.  It worked well enough to check twitter and get to my web mail.

For this trip, I was headed to Florida.  The Orlando airport (MCO) also has free wifi, currently it is supported by Google through the holiday season but it is always free.  I’ve been in several US airports which also have free wifi year round, and given that you’ll likely end up waiting around for your flight having internet access is a great way to while away the time.

Ideally any location you end up waiting in for some undetermined amount of time should have (very) cheap or free internet.  My car dealership has free wifi in the waiting area, why not extend this to doctors offices, bus stops, train stations, banks, etc?  Imagine if the government decided that all of its public service centers (think passport office) would have free wifi – I’d be way more willing to sit patiently and wait.

One last note – I’d like to recommend the WiFi Get app for the iPhone/iPod Touch. I think it’s a must have app if you travel with your device. 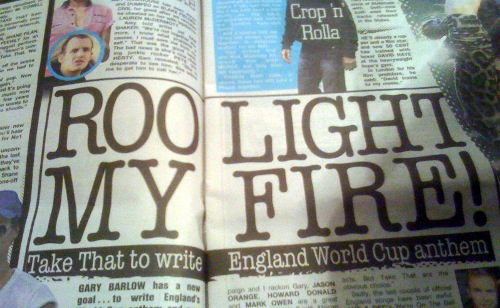 My good friend Ken is in London this week, and today I get this image in my email along with:

Have no idea what this means. Some paper in the bar while I was having supper.

If this was printed locally, no doubt I’d arrive at the office to find it thoughtfully taped to the wall outside my office.

I suspect the paper was News of the World, as I found a very similar article here.  It seems that Wayne Rooney is often tagged with the nickname Roo – not bad company I suppose.