Almost 2 years ago I joined the iPod cult by winning a raffle at work where the prize was a new 30G iPod Video.  Just the other day the iPod stopped working.  Over its lifetime there were a few times when a hard reboot was required, but now the device doesn’t power up at all.  Rebooting it doesn’t do anything – I just have a dark screen and that’s it.

As I’ve past the default 1 year warranty, I’m on my own to fix (or replace) it.  Looking at the Apple site, repair will cost me $149 + tax + shipping.  It seems via various 3rd party resellers, I can pick up a refurbished 30G Video for around the same price.  The Apple store has refurbished 80G Classics for $189, and the 8G Touch for $209.  I may look around to see if there is repair option locally that is a bit cheaper.

Of course – I love to open stuff up, and Karl had a set of the tools to lend me so I had no excuse.  Using instructions from ifixit.com I was able to get a good feeling for what I was in for.  Opening the case was actually easier than I thought it would be.

I then detached the battery using a toothpick in place of the “spudger” tool the instructions reference.  Originally I was thinking that maybe I should try to see if there is something funky with the battery not holding a charge, but looking at the ribbon cable I’m not sure how I’d get a multi-meter in there to test it. 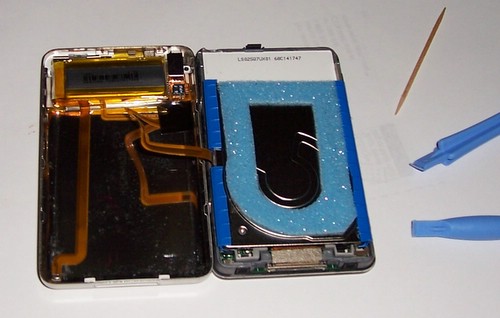 So I detatched the headphone jack ribbon cable, and hard drive to get a good look at things.  Usually if something electronic has failed badly, you can smell the burning components.  In this case, the logic board looked (and smelled) just fine. 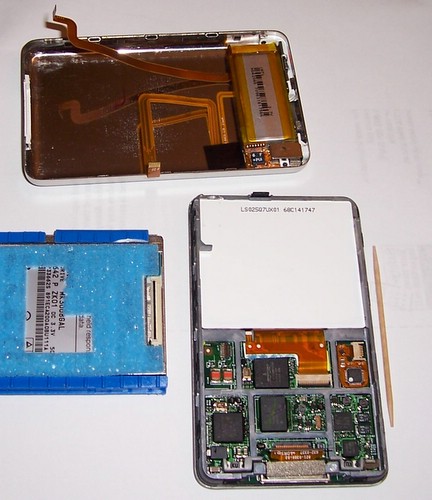 I tried plugging the iPod into my PC in various states of “taken apart”.  I wanted to see if my PC would supply power / recognize the device.  Now, I know basically nothing about diagnosing iPods – so it is entirely possible that once you disconnect the battery nothing will work at all.  Either way, nothing seemed happy when I applied power to it – no harm done, but no magic solution here either.

I suppose that I could start probing the logic board to determine if I’m getting power over the USB cable, but I’ve tried the cable on both a USB wall wart, and more than one PC.  It is possible that the cable is busted – so I can try that tomorrow at work with someone elses cable.

At this point I’ve eliminated any obvious problems, and satisfied myself that opening (and reassembling) the iPod isn’t all that hard.  If it is the logic board, then I’m looking at $90 or so.  The Apple store $149 option is starting to look pretty reasonable.

If the 32G touch wasn’t $419 refurbished – then I might be thinking that was the ideal upgrade.  Any other option means I can’t simply carry all of my music with me and I may as well just get a $55 shuffle – or dump the whole iPod thing and get something that is Linux friendly.

Well, more on this later – shout out if you happen to know more about DIY ipod diagnosing.