We’re busy moving our home office from one room in the house to another.  My home office was very similar to my work office, full of random junk — so far the new home office is fairly tidy, but this has come at a cost – I’ve had to part company with some of my beloved junk.

Hanging about in the closet was my 3rd ever computer, a 486/33.  I bought this in the very early 90’s – and was certainly the 1st kid on the block with a machine of this caliber.  I was working as a COOP student at QNX back then, and this my new machine was equivalent to the ‘really fast fileserver’ they had in the lab.  This 486 was paired up with my external USRobotics 14.4k modem that looked a little like a stealth bomber.  Let’s take a look inside: 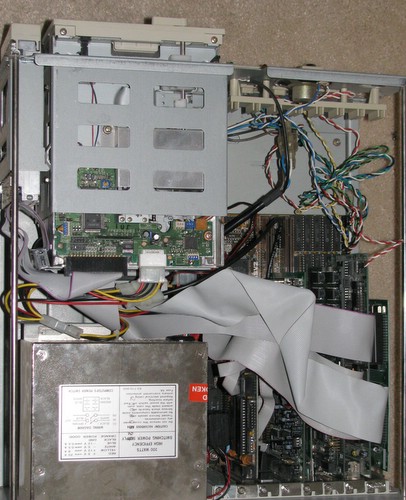 Under the mess of cables you can see that the ISA expansion slots are nearly full.  This is a sharp contrast with new computers which much more commonly have almost all functions implemented on the motherboard, in this old PC everything is supplied by a specific add on card.

the IDE card, supporting the floppy drive and CD-Rom (which was an add on much later in this computers life).  If you look carefully at the first picture above, you might notice that there is a 5.25″ floppy drive in there.

The next card is

an Adaptec 1542b controller card, this was purchased in combination with a 1G SCSI drive at a combined cost of nearly $2000.  At the time, if you wanted a large drive you had to use SCSI – and in addition, the operating system I was running (386BSD) only had support for a limited set of hardware, the 1542b being one of the supported cards.

is a Microsoft bus mouse card.  This was before PS/2 mice, and way before USB ports.  In truth, the bus mouse card was added many years after when I had stopped using this machine as a unix (server) machine and had started to use it as a desktop (Windows).

Of course, we need some serial ports to hook up that external modem.  I’m pretty sure that this card had a pair of 16550 UARTs on it allowing the use of the higher modem speeds.  This card used a 2nd expansion slot on the back of the PC case to house the 2nd serial port and game port.

Then we move on to

the video card.  Again this was not the original card in the machine but an upgrade I added later on.  This particular card was a v24 bitblaster S3 card – capable of running XWindows fairly well at the time.

The last expansion card to mention would be the 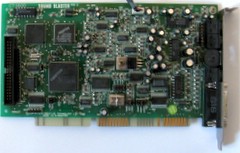 sound card, a classic SoundBlaster card.  Again this was a very late addition to the machine when it did its last stint of service as a Win95 machine.

Let’s take one last peek under the hood at the motherboard itself and the installed RAM.  And yes – that’s a total of 32MB of RAM stuff into all those slots.  It is also interesting to look at how much copper is visible on the mainboard – you could probably build several new machines from the materials used on this one board. 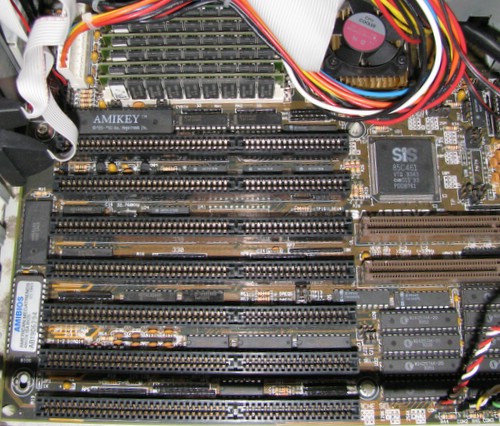 While it hadn’t seen regular use in the last 4 years or so, this machine did boot fine the other day.  Considering the core hardware is was more than 17years old, I think that’s a pretty impressive track record for any computer.  Today my cell phone has more MIPS than this computers, so it was certainly time for it to go.  Sadly, the last boot of this machine was to bring up DBAN to wipe the hard drive.

It was certainly time to have this machine leave the house, as I didn’t even own a keyboard that fit into the old AT plug at the back.  Luckily (some would argue) I’ve got an AT keyboard stashed in my office at work.

Once I showed up at work with a PC that was needing to be recycled, several others came out of the woodwork.  The result was quite a pile which we managed to cram into Trent’s Smart Car obeying the unwritten rule that lunch trips should be done using the most dangerous transport possible. 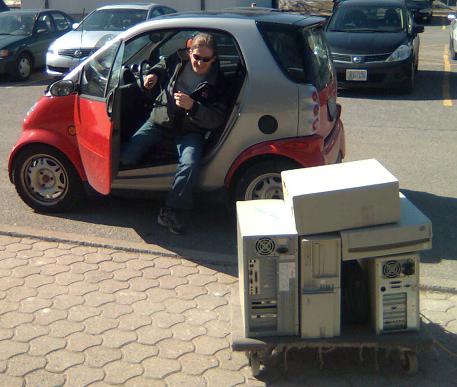 Yup, 5 desktop PCs and a 9lb Dell laptop in a black bag – and both Trent and myself fit in there too.

It turns out the the local eWaste rules are about to change.  We took this pile of stuff by ComputerRecyclers which used to have a really nifty store where you could browse around in the still useful but old parts – but it turns out they have no storefront anymore.  Another local recycler has a better description of what is about to happen as of the start of April, and apparently the new rules prevent them from running an outlet store.  The good news here is that they will be apparently taking back a wider range of items, all at no cost (even monitors).

I suspect most people didn’t bother to read through all of this nostalgia – but if you did, take a moment to think about all the cool hardware you’ve had pass through your hands over the years and if you’re so inclined, post a comment about it.  Also, if you happen to have old electronic hanging around – please take the extra time to dispose of them properly so they don’t end up in the landfill.

2 thoughts on “eWaste and Nostalgia”