I run Ubuntu on my personal desktop at home, I started back with 6.10 (Edgy) and have simply used the upgrade distro option to drag things forward into the future.  For various reasons my partition table was sort of messed up, and I had left 42Gb of the drive to WindowsXP – so I’ve been meaning to wipe and re-install for a while.

The 1st step was to back up my existing configuration (backups are good).  Then I punted a bunch of stuff from the WindowsXP partition to let me shrink it with GParted.  I created a bootable USB key using UNetbootin (run under my previous Linux install) – very slick. 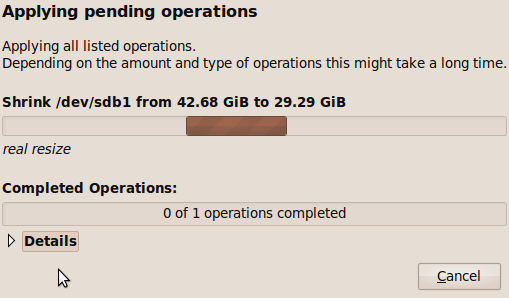 The NTFS resize option of GParted is scary, but oh so very useful.

The installer has improved, the partitioning step is still something that may cause you to stop and scratch your head in confusion (not all bad I suppose).  The disk selection suggestion was a bit off for my setup, but I’m not exactly typical.  Installing from a USB key is very nice, I won’t be burning any more install CDs unless I’m forced to.

Post installation fun: Even with a backup, you know wiping a disk and starting over was going to be lots of forehead slapping doh moments.  The built in email client (evolution) has a backup/restore facilty – shame I didn’t think about using it prior to the move. This isn’t a big deal as all of my email lives on my IMAP server, so my only ‘loss’ is some address book entries.

It seems that 9.10 uses a newer version of grub.  I had the USB drive with my backup mounted, and it seems that the update-grub command managed to find my old kernels too? (duh, because the USB drive appears as /dev/sdc1 it is a valid boot drive to look on) Neat, but not what I wanted.  Renaming the /boot directory on the backup drive and running update-grub fixed me.

The Linux version of Chromium has been getting slowly better.  I find it is faster to start than Firefox, but less functional (for now).

Another key add-on for me is VMWare Player.  They have a pretty nice 80MB shell script “installer” (.bundle) that just works under Ubuntu 9.10 – remember to run it as root.

There are lots of other little things still missing: MythTV, Calibre, K3B, Grip, LightScribe software, and many desktop customizations.  However, for the most part with once email was configured and I had VMWare setup to run my virtualized images it was starting to feel like home.

Ideally it would be nice to have a post-new-distro script which would allow me to run and re-create my preferred environment.  I wonder how hard it would be to create one of those..