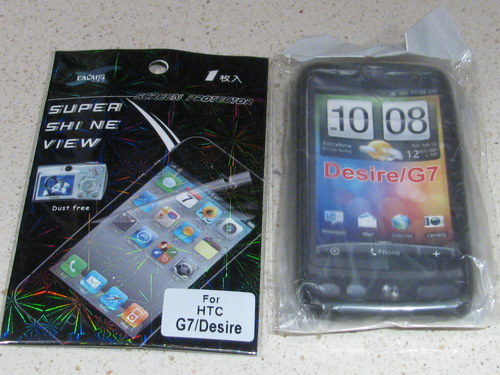 The NexusOne had a nice dock, however the dock really wasn’t compatible with any cases. It did have a screen protector on it (from zagg). For my (new to me) HTC Desire I have no dock, so I thought I’d get a case and a generic screen protector. I’d dropped the NexusOne once or twice and cringed as it hit the ground. No major damage was done, but I did add a dent or two.

You can see what I bought above. It was a $2.99USD from an eBay seller, shipping from HongKong included. Based on the stamps on the envelope, it cost about $0.70 postage to ship it.

The case was exactly what I expected. A slightly flexible case with all the right holes for camera, headphones and power. The power and volume buttons are covered but function well. It is a good snug fit over the phone. The case adds some bulk to the phone, but not a lot of weight. I’m still quite pleased with the case after having it on the phone a couple of days.

The case is described as TPU GEL. Thermoplastic Polyurethane (TPU) is a type of plastic, the GEL is I suspect used to describe the flexibility of the case, as there are TPU cases which are hard plastic. Jenn has a Kate Spade silicon case for her iPhone 3G and it’s quite a bit more rubbery than this one.

The use of screen protectors is almost a religious issue. I hadn’t had a phone with a screen protector until the NexusOne, and it came to me with one installed. The HTC Desire does have Gorilla Glass on it, however it isn’t immune to small nicks and scratches. 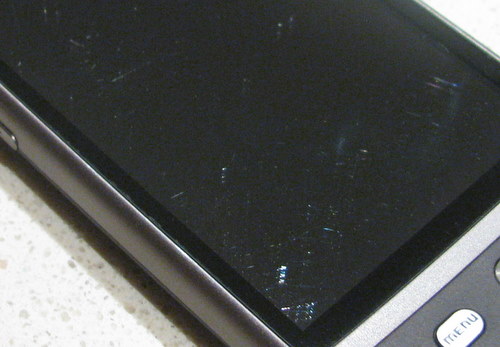 Hopefully you can see the numerous small nicks on the screen in the picture above. You didn’t see them in normal lighting conditions, but the were there. I figured for the price, I couldn’t really go too wrong. 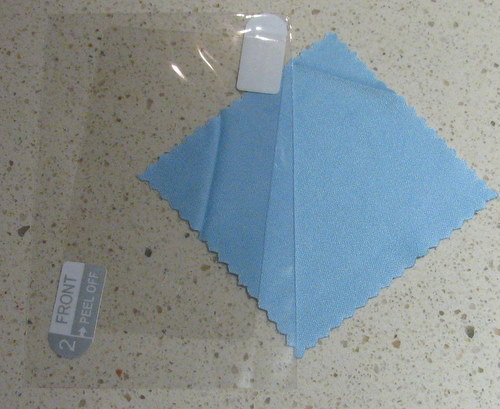 The screen protector is the typical generic screen protector. They include a small cleaning cloth as well. The instructions read a little like engrish, but are understandable. The screen is by no means anti-glare, the resulting finish is high gloss and I did have a few minor bubbles. Compared to the zagg which had a very distinctive feel to it, this one feels just like the bare screen. 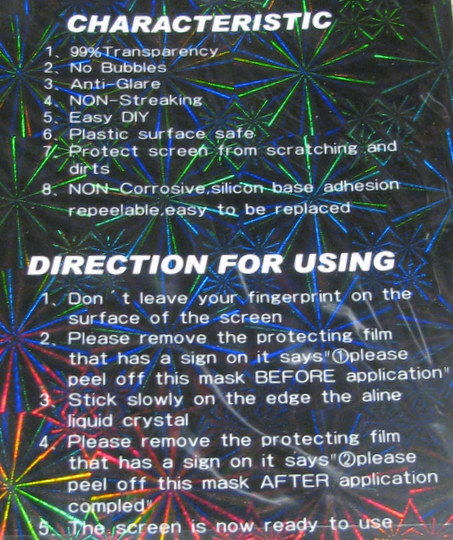 I ran into the usual problems when applying the screen protector. The first film you take off exposes the sticky adhesive that will bind the screen protector to the phone. Of course it will pick up every free dust particle in the area – and even a grain of dust will show up as a bubble on the screen. Using the dusting cloth too close to the adhesive is a great way to get more stuff stuck to it. I found that the corner of the protective film used as a pick was useful for clearing dust bits out of the way – even off the adhesive.

One tip I may try in future is to do this in the bathroom. Run the shower to make the room a bit steamy, this will reduce airborne dust. Then make sure you’ve got good bright lighting and go to it. If you can get it perfectly aligned the first time that’s best, the more you mess with it – the more you are dealing with small bubbles. Large bubbles can be worked out prior to removal of the 2nd film.

Looking at the final product of my efforts below, you can see a number of imperfections in the application. Dust trapped below the screen protector as well as a few circular artifacts which are air bubbles. The screen protector also didn’t quite seal down in a couple of corners (likely where I handled it too much). None of the imperfections are highly visible in normal usage. 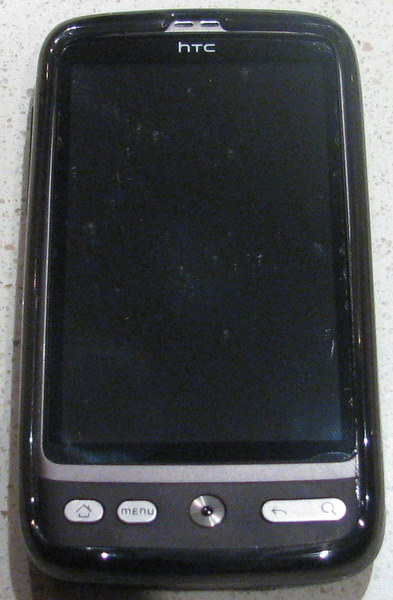 Apparently Steve Jobs had commented (on iPod’s) that stainless steel looks beautiful when it wears, and I have to agree. The rate at which I seem to change phones lately (about once a year) it is unlikely that I really need to worry about protecting the device all that much. Without any case or screen protection, it is likely this phone will last the 3 years or so before it is completely obsolete – I’ll still feel much better the next time I drop it onto the pavement.