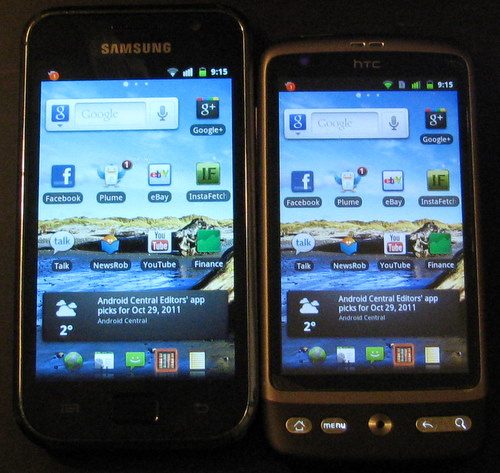 While I switched phones, I wasn’t interested in switching away from the community firmware (CyanogenMod) that I’ve been running for the last several phones. Above you see the Samsung Galaxy S Vibrant pictured next to the HTC Desire. You can clearly see the difference in screen size (resolution is identical).

For purposes of firmware changes, the i9000m is very similar to the international version of the i9000. CyanogenMod for the i9000 has only been moved to stable as of 7.1 – so support for it is still relatively new. Compared to the Desire which shares much with the NexusOne and has a very stable base in the community.

Initially my plan was to root, unlock, then start playing with firmware changes. After banging my head for an evening trying to get SuperOneClick to work under Linux I gave up my initial plan. [Recent experience shows that SuperOneClick 2.2 works fine under Windows]. Plan B was to just install CyanogenMod after which we’ll have root and we can unlock.

Since I did this, the wiki instructions have changed and now specify 2.3 as the base, when I did this they specified 2.2. If in doubt, follow the wiki.

The steps break down the following steps

Step 1) So heimdall is a cross platform open source firmware tool for Samsung devices. It seems to work well under Ubuntu and you can use the CLI, or add a GUI package.

Step 2) I used the GUI and found it to be straight forward installing the speedmod kernel.  Simply place your device into download mode, point heimdall at the kernel file you download via the wiki and off you go.

At this point we are running a rooted device AND we have ClockworkMod recovery image installed. We could at this point decide to unlock the device and use it as is. Since we’re so close, let’s just move on to step 3.

Step 3) Install CyanogenMod + optional Gapps. I suggest you get these via the Forum and grab the latest. This is as simple as place the files on the internal SD card, and boot into recovery. From there I suggest you follow the instructions and do a full wipe / factory reset then do the installation.

The install of CyanogenMod 7.1 will result in your ClockworkMod being upgraded as well, this is an artifact of the Samsung system layout which seems to lump everything into a single update lump. In my case this meant I also got a modem that was more suitable for use in the United States and registered with my local carriers as roaming. I ended up using the KG3 radio.

In the photo at the top of the screen, both devices are running basically identical configurations. I used TitaniumBackup to get to this state, but I won’t recommend it in general. The resulting installation worked, but exhibited some instabilities. I can’t pin the blame on TitaniumBackup, but the wisdom of the forum was that it can introduce problems. What it did do for me is something that I find to be a real problem moving from device to device, the Android Market treats each device you connect individually – there doesn’t appear to be an easy way to say “take all the apps on this device, and put them on this other one”.

The nice thing about the sequence of steps here is that we haven’t needed to change the bootloaders at all, this increases the safety factor of what we’ve done as we should be able to easily get into recovery or worst case download mode to fix things.