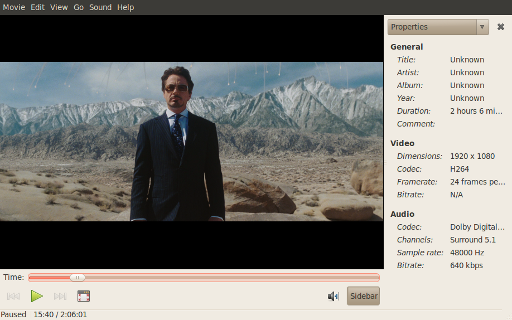 In my recent post I talked about the problems I had with blu-ray playback and Ubuntu. I’m now happy to report that I can accomplish what I originally set out to do: rip and convert blu-ray discs on my Ubuntu system for playback on my mobile devices.

The solution was provided by an update to makemkv (1.6.13), it now supports bus encryption capable drives (BEC). As I wrote last time, installing makemkv on your Ubuntu system is straight forward if you follow the detailed instructions. If you’re a developer familiar with ‘make‘ and are comfortable doing a bit of unix admin stuff, then it’s easy.

Makemkv is shareware: free to try for 30 days, then if you’ve found it useful you’re asked to pay for it. The purchase price is 50 euros. The key you receive is valid for all platforms and all versions (including future ones). The price may seem steep, but compare it to the cost of a blu-ray playback device or a video game and it starts to be very reasonable. The linux version is in beta, and while it is in beta it is free.

Unlike my previous experience with makemkv being unable to process a blu-ray disc, this version happily detected the movie and gave me simple way to rip the movie (25Gb!). The data is being decrypted on the fly so this cuts the read speed down to 3.6x – resulting in a 36 minute job for the 2 hour movie.

There is an option to stream the movie from the original disc. When I initially tried this with mplayer it worked, but was laggy. Using vlc streaming is smooth, but my version (1.0.6) doesn’t support the trhd audio codec so I get the spanish track. Running mplayer with a larger cache (-cache 8192) results in smoother playback, but the same spanish audio track problem. The ripped version of the movie plays back smoothly under mplayer and vlc with no audio issues.

The main reason I installed a blu-ray player in my PC was to enable me to rip and convert the movies for use on my mobile devices. Handbrake is my tool of choice for this type of conversion. 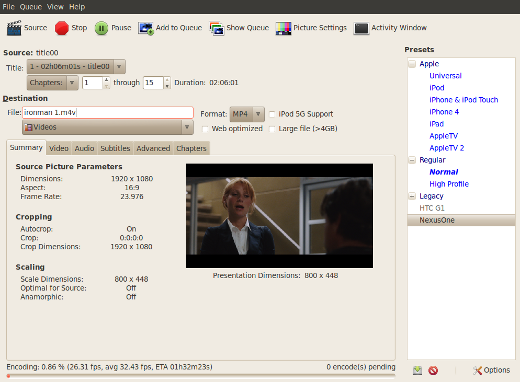 As you can see, Handbrake is quite happy to convert the ripped video. My system can typically do a DVD in 20 minutes from physical media to mobile format. With blu-ray it seems I’m closer to real time (ie: 2hrs for a 2hr movie) due to the amount of data and the two step process. Still in the end, I’ve got a version of the movie I can take with me when I travel.

For folks interested in reading up on blu-ray and AACS, I came across the specification (pdf).