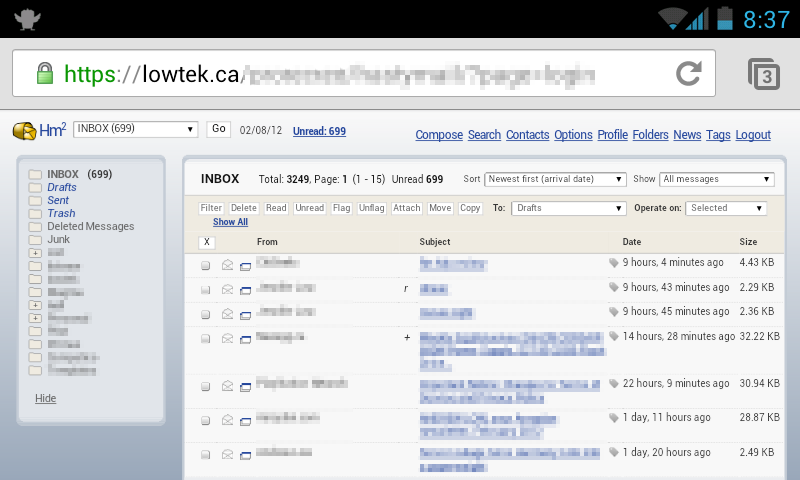 Pretty much since having high speed internet at home I’ve had a machine externally accessible, initially through dynamic DNS and later via a static IP. Even prior to running a full mail server, I had a mail server setup to pull email using fetchmail from the couple of email sources I was using. Being able to access my email over the web was pretty handy, and I trusted SquirrelMail to provide this function.

Setting up SquirrelMail under Ubuntu is fairly straight forward, the packages are in the repositories and setup is a snap following the instructions. The version I have installed is a little dated but it handles email when I’m not home just fine, I particularly like the ability to setup alternate identities making sending email from an alias easy (actually easier than messing with aliases in Evolution).

The version of SquirrelMail I have isn’t really that slick on a small (mobile) screen. I looked at just installing the right theme/skin to SquirrelMail to support mobile browsers and there doesn’t seem to be any (free) solutions. This got me looking around.

First stop was NaSMail, a fork of SquirrelMail but apparently better for mobile. Long story short – NaSMail looks a lot like SquirrelMail, even on a mobile device. There is a mobile browser plugin – but it didn’t change very much of the look and feel. The install process was easy and things went smoothly.

Since NaSMail didn’t address what I was looking for it was back to searching around. RoundCube seems to have a strong following and there is a version in the Ubuntu repositories. Sadly the repository version is quite old and didn’t appear to be compatible with the theme I was trying to use.

Installing RoundCube from “source” was also quite easy, there was a howtoforge article which was useful. I got a bit hung up with something that turned out to be my error in the end – I had mixed up ‘username_domain‘ and ‘mail_domain‘ in the configuration file causing my IMAP logins to fail. Turning on some additional dovecot debug helped.

If you find yourself debugging IMAP login issues, the Ubuntu guide for postfix is a good resource. Basically you want to edit the /etc/dovecot/dovecot.conf file and add:

Then monitor the /var/log/mail.log output to see what’s going on.

So RoundCube is very pretty, but it completely fails on a mobile device as the UI expects double-click actions. You can manage to navigate if you are persistent but it’s a bigger barrier than my existing SquirrelMail setup. There are commercial mobile browser skins, but the only free one I found (MobileCube) was mostly a cosmetic change of the default. I will mention that the commercial skin cost is only $32 – probably less costly than the time I sunk into poking around. The double-click UI for RoundCube turned me off, I much prefer a web like single-click UI even when using a full browser.

My last stop on the webmail search is HastyMail. There is no Ubuntu support of this one, but installing from source is fairly straight forward and well documented. I will note that there is a site_key in the configuration file you’ll want to change for security purposes, I generated a new key using a web based password generator and would recommend you do something similar. The config file is human readable and is processed into a machine readable format, I found the command line version more convenient than the web – but both work fine. 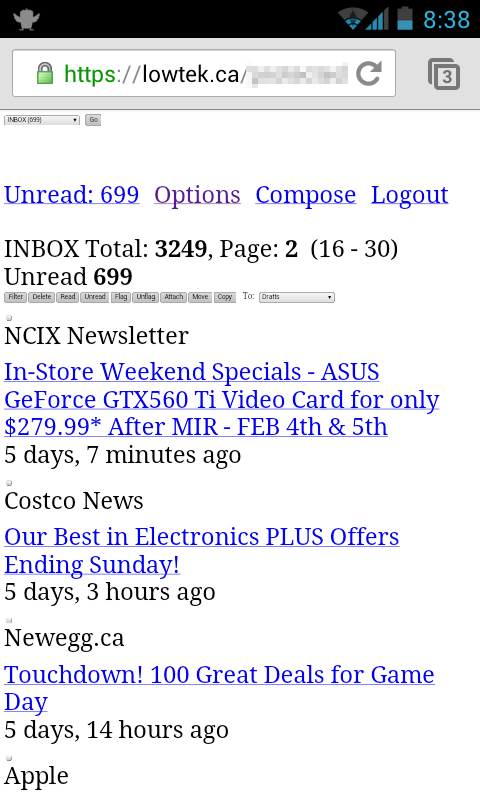 HastyMail looks prettier than my existing SquirrelMail, appears to format nicer on mobile browsers (but not perfectly). The image at the top of this post is from my Android phone in landscape mode, I’ve blurred some details but there should be enough to get a sense for how it appears. It also has a ‘simple mode’ which is great for low bandwidth or low capability screens, this is captured in the second picture on the right. I wish there was a theme somewhere in between the default and simple modes, maybe I’ll poke at that sometime.

There are many other webmail options out there: AtMail, Xuheki, Horde, … For the most part they seems to target niches. Most people are migrating to hosted webmail (Gmail, Yahoo, MSN) or simply using the mail client on their mobile device.