Today it’s fairly typical to have an always on, high speed internet connection. Many geeks like myself will run a Linux box 24/7 at home that acts as a file server, media server, and possibly a few other roles like email and web. Enabling ssh access it extremely handy for when you’re away from home, not only does it give you secured shell access but it enables tunneling over ssh. A secondary but also valuable ability of this type of setup is online file storage that is on hardware you own (or more specifically, not owned by someone random).

You might want to enable friends of yours to also enjoy the benefits of having online file storage, but you might not want them tinkering around inside your system with full shell access. Whatever the reason for your paranoia, scponly is a great solution.

scponly is an alternative ‘shell’ (of sorts) for system administrators who would like to provide access to remote users to both read and write local files without providing any remote execution priviledges. Functionally, it is best described as a wrapper to the tried and true ssh suite of applications.

It is quite easy to install and configure scponly on Ubuntu:

During the package configuration step that is triggered automatically on the install, you’ll be asked if you want chroot or not. 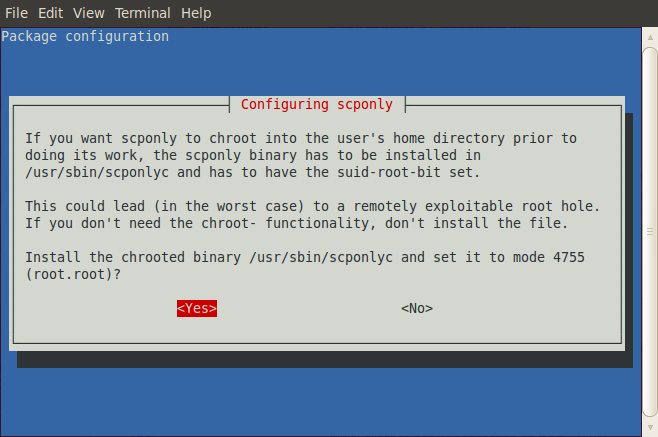 While the warning appears to be quite dire, choosing yes has some advantages. In a chroot jail the apparent root directory is modified, this limits the users visibility to the filesystem – often to their home directory. The security warning is due to the implementation of scponly needing suid-root  privileges in order to create the chroot jail. You need to assume that the scponly code doesn’t contain any potential exploits, a trade off for the reduced filesystem visibility that in turn increases system security. In the end, as scponly is wrapping the well known and validated ssh suite we’re in a fairly good place.

Next we need to uncompress and modify the setup helper script to be executable:

Use the helper script to create a chroot restricted user (frank).

for this reason, a writeable subdirectory will be created that
the scponly user can write into.

Your platform (Linux) does not have a platform specific setup script.
This install script will attempt a best guess.
If you perform customizations, please consider sending me your changes.
Look to the templates in build_extras/arch.
- joe at sublimation dot org

In the above I provided a username (frank) and I accepted the defaults except for the writeable subdirectory (backup) and password.

On my test system, an Ubuntu 11.04 (Natty) desktop install I wasn’t able to connect using scp, or sftp.

It turns out I was hit by a reported problem, and it was a simple matter of copying some missing files into the chroot jail:

Now everything worked. I could scp, sftp and mount using sshfs (one of my favorite utilities).

If you want the writeable subdirectory to be the default directory, simply modify the system /etc/passwd file to have a double slash followed by the directory: