A couple of weeks ago my APC Back-UPS 1200 XS started beeping at me, the battery light was flashing, a clear sign the battery has packed it in. I wasn’t overly surprised as the unit is quite old (I’m guessing 8 years? I can’t recall exactly when I got it) – you should only really count on a battery to last 3 to 5 years so it’s done well for me.

While I don’t remember exactly when I bought the UPS, I do remember price matching FutureShop against BestBuy, the price difference was only $20 but it still made me laugh to do it as they are both owned by the same parent company – that and the price match gave me an additional 10% off of the difference in savings (yup, a whole $2). The manual says I should buy a RBC33 battery pack, these are nearly the same price I paid for the entire UPS ($99 + tax).

I looked locally and on the web for a reasonably good deal for a replacement battery pack. The prices had quite a range and I could have opted to go for a RBC32 which is cheaper but still nearly the cost of original UPS. In the end I opted to go for the DIY route and just buy compatible batteries and do a swap – ebay had the best prices, but amazon.ca had a vendor that was almost the same price and I thought I’d go that route as shipping would be quicker. 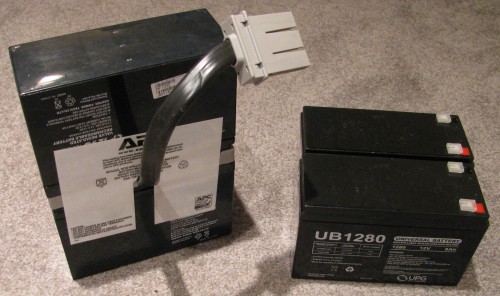 The procedure was very simple, it took me under 10 minutes and I was stopping to take pictures as I went along. Start by peeling away the sticker from the side with the cable sticking out – put it aside if it still is sticky enough to re-use. Fold the batteries so they are side by side. Remove the cables from one battery, then remove the sticker on the other side and separate the batteries. Last remove the harness from the remaining battery. 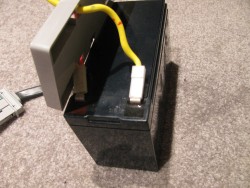 Reassembly is a matter of working in reverse. I suggest taking pictures as you go as it is a great way to reference which wire went where, but my photos are a reasonable guide as well. You could also watch this youtube video which covers the battery swap.

My completed battery pack looks a lot like a stock RBC33. If the original stickers don’t have any stick left, a little duct tape should work well.

The batteries in the original pack were 9Ah and my replacements are only 8Ah, this will affect the runtime of my UPS – for my needs a few minutes of backup are enough to protect the system, the new battery pack should give me nearly 30 minutes. Generally the power is good in my neighbourhood, and if it is an extended black out we’re without power for hours.

I’ve seen a few battery packs from systems at work where the batteries have bulged and are clearly bad, mine actually looked fine so I may try to restore them later. I did also consider upgrading to sealed marine deep cycle batteries, but the cost was significant and I’m not convinced of the safety of the solution.

One footnote, I have the UPS plugged into my server and use apcupsd to monitor the status. When the old battery had failed and the UPS was beeping my logs filled with the following:

Occasionally the beeping would stop (and I assume the logging) but in a short while it would resume beeping (and logging).