When it was time to get one of the kids a Chromebook for school years ago, I made sure to purchase a 4GB memory model with an Intel chip. I’m a fan of ARM devices, but at the time (6+ years ago) there was some real junk out there. There was also a price factor and I was looking at the lower end market, durability was also a concern.

I remember the Dell Chromebook 11″ was a hot item back then, but the pricing was higher than I wanted. Same for the Lenovo Chromebooks. After a bunch of searching around I found a nice HP Chromebook 11 G5 (specs) – if my memory is correct I got this well under $300 at the time.

This HP 11 G5 worked well, survived a few drops, and made it until it’s end of life – when Google stops providing OS updates. I’ve since replaced it with a nice Lenovo IdeaPad Flex 5 Chromebook – a nice step up, and there was a refurb model available for a great price (under $350).

For a long time there has been Neverware CloudReady – a neat way to get ChromeOS on old laptops. I always worried that there were security concerns with some random company offering ‘Google’ logins, but Neverware worked well. Google has since bought CloudReady, and seems to have turned around and created Chromeos Flex as the successor.

I figured that I could use Chromeos Flex on the HP 11 G5 to continue to get updates. Another solution would be to look at turning it into a GalliumOS machine. I actually have another old 14″ Chromebook I have run GalliumOS on, but have since moved to Linux Mint and use it as a generic Linux laptop.

I would recommend reading through the GalliumOS wiki information carefully to learn about the process of converting a Chromebook into a useful generic low end laptop. Specifically the Preparing section, a review of the Hardware Compatibility section and Firmware sections. Inevitably you’ll also end up on MrChromeBox’s site – which is where you’ll get the firmware replacement you’ll need.

While you can in some cases get alternative firmware running on the Chromebook hardware, it’s much easier if you go remove the hardware write protect. There wasn’t a specific guide to doing this, but the iFixit site was useful for the tear down aspect. 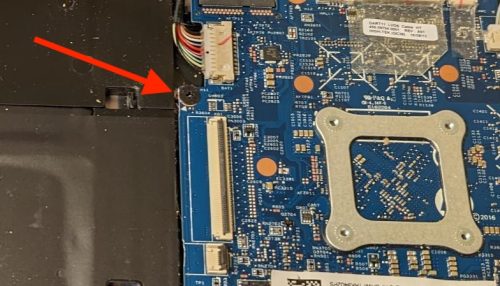 You will want to remove the black screw pointed at by the arrow. It’s near the keyboard ribbon cable connector. This is the hardware write protect.

Once I’d done this, it was simply a matter of installing the
“UEFI (Full ROM) firmware” using the MrChromeBox scripts. This is not for the faint of heart, and I do recommend making a backup of the original firmware in case you want to go back.

At this point you can install any old OS distribution you want. In my case I wanted to install Chromeos Flex, so I’d downloaded that and created a USB drive with it ready to roll. Installing it on my newly firmware updated Chromebook was easy.

I then ran into trouble. While Chromeos starts up fine, it was quickly clear that sound didn’t work. The video camera was working fine, but I couldn’t get any output or input for sound. I found that others had this same issue. I even tried using wired headphones (same problem) and bluetooth headphones (sound out was fine, sound in didn’t work at all)

This is a bummer, but understandable. Chromebook hardware is not really the target for Chromeos Flex. I figured it was worth trying out a generic Linux distro, so I picked Linux Mint. Booting from a USB drive with Mint on it was again easy with the new firmware. Sound output worked fine, as did web cam video – but the mic was still a problem, again something others had discovered.

At this point Chromeos Flex was a dead end. I can’t give someone a Chromebook that doesn’t have audio in or out and no reasonable work-arounds to get there. Installing Linux won’t trivially solve the problem because I get sound out, but no mic.

Remember when I said it was a good idea to backup the original firmware? Yup, we’re returning this Chromebook to stock (but I’ll leave the write protect screw out – because why not?). The MrChromeBox FAQ walks you through restoring that firmware. Since I had Linux Mint on a bootable USB I just used that to start up a shell and pull the script. Once I’d restored the stock firmware, I needed to build a ChromeOS recovery image and then return to a totally stock setup.

Now this old HP 11 G5 Chromebook has all of it’s features working, video, sound, mic.. but is trapped on an expired version of ChromeOS. Eventually the browser will become annoyingly old and at that point you’ll have to decide between the limitations of the browser, or losing your mic (and possibly sound).