Sure, the Samsung S7 is a 6 year old phone at this point – but it’s perfect for my son who’s in grade 7 and doesn’t really need a phone. The other day it stopped turning on – when you plugged it in, it would indicate the battery was at 100%. I could even get it to power on while plugged in, but removing the USB power would result in an immediate black screen as it powered off hard.

I sort of dreaded opening this phone up because it’s one of the ones that is glued shut. I was pleasantly surprised, as a little heating with the heat gun and the all metal back came up pretty easily using a suction cup. After that there were some phillips screws to remove and I was able to see the battery. 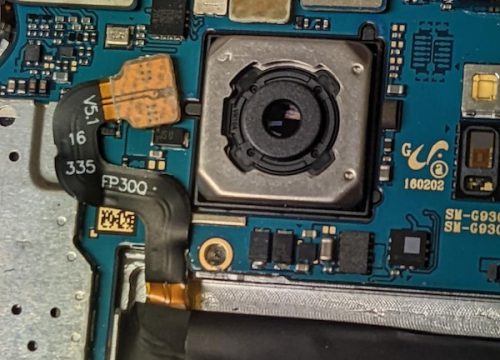 It was clear there was a problem here – the connector should be squared up with the rest of the circuit board. If you look closely – you can see that the battery has also shifted down significantly within the phone, nearly 2mm.

Taking a close look at the cable – you can see the connector is a little busted up despite my photo being a bit out of focus.

I attempted to reconnect the cable, but soon found out that the connector was badly damaged and it snapped off the cable completely.

Oh well. Off to search up buying a new battery for this phone. A quick look around and it seems there are lots of choices – some as low as $16 (eBay), and the normal crazy mark-up ones at $60-$90. I opted for one of the Chinese made knock off brands off of Amazon that came with tools (junk) and the adhesive to re-attach the back. It also claimed to be 3300 mAh vs the stock 3000. It was at a slight premium vs. eBay, but only a couple of bucks and the reviews were good. Worth the $25 and it shipped to me the next day.

My pricing logic for stuff like this is to avoid the cheapest prices – these are often very cheap for a reason. There is a step up from the cheapest where you’re going to get basically the same part up to the next price plateau – if you can discern the price notches you can basically buy at certain quality levels. The danger with all of these is that lots of unethical sellers will slap OEM labels on parts that are not, so often paying a high premium is not buying quality at all. It’s always a gamble which is frustrating.

The battery I’m replacing was already previously replaced. I think this is why the battery didn’t fit very well in the phone.  The poor fit is likely what resulted in it breaking off (when the phone was dropped, probably multiple times if I know my son). If you fit the broken battery into the compartment properly there is a significant gap at the bottom.

Again, this is nearly 2mm gap. The OEM battery is tape/glued in – but I suspect it also fit much more snugly in the space. If you are replacing a battery – consider if it will slide around and either tape – or pad it – to avoid the battery moving. I know that I’ve done battery swaps and left a gap in the past – I probably won’t in the future.

The new battery fits like a glove. Top to bottom, almost no space to move around. So I didn’t bother taping it in place, I’m pretty confident it’ll stay put.

While I’m not a fan of glued shut phones – I did use adhesive to re-seal the phone. Hopefully I won’t have to go back in at all. In a couple of years this phone will basically be too old to use. While it’s still running stock firmware, it does appear that there is an unofficial but current LineageOS build for it.

The S7 got a 3/10 score for repairability – but it wasn’t really that bad to get at the battery. The places where it got hit on the score was replacing some of the other components – I’ve certainly had more than 1 USB charge port go bad, and gluing that to the screen seems like a really bad idea. There really needs to be a better trade of for waterproofing and repairability.