So a while back I posted about my how my video iPod had stopped working.  My investigations pretty much pointed at the logic board being bad.  I do have a classic 512MB shuffle that I’ve been rocking, but I miss the display to figure out what album (or even sometimes artist) I’m listening to – also I had been using the video feature to watch transcoded TV shows from my MythTV PVR.

This had me surfing the apple refurb store and considering the $89 nano there since a replacement logic board will run somewhere around $90 (and I don’t get a warranty).  The local used market also was very tempting as video iPods seem to run around $100 – $120.

The usedottawa.com site seems to generally have the best local prices, but I really wanted to find one for less than $100.  As luck would have it, someone posted a black 30G video iPod for $60 the other day – I leapt on the opportunity.  I figured at this price, it was going to be a little banged up, but as long as it worked I could do a transplant. 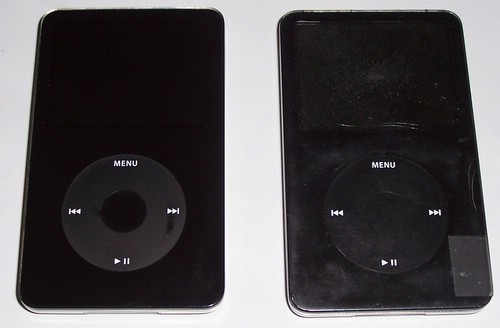 My busted iPod is on the left, the used (but working) iPod on the right.  Note the scratch on the screen area and tape on the lower right side.  Generally the surface has been badly scratched up, this iPod has had a rough life. 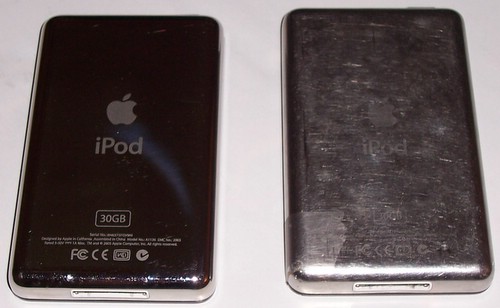 Even the metal back shows serious signs of wear.  There is also gunk inside of the dock connector making the cable connection a bit tricky (I’m pretty sure if I clean out the gunk – it will be fine).

Even the side of this case is starting to bust apart (thus the tape).  I’m sort of amazed that this unit still works – it sort of restores my faith in the quality of the iPod devices.  While $60 might have sounded like a too good to be true deal, based on its condition I paid a fair price for it.

Well, next step is to strip both units down and do a little transplant surgery…

One thought on “A Tale of Two iPods”