Well, despite my successful installation of a DIY solid state drive – the old laptop continued to develop new problems (the keyboard started to get sticky keys).  I did agonize over buying something new (or maybe a used ThinkPad) and finally settled on one of the new netbooks – the Acer Aspire One. 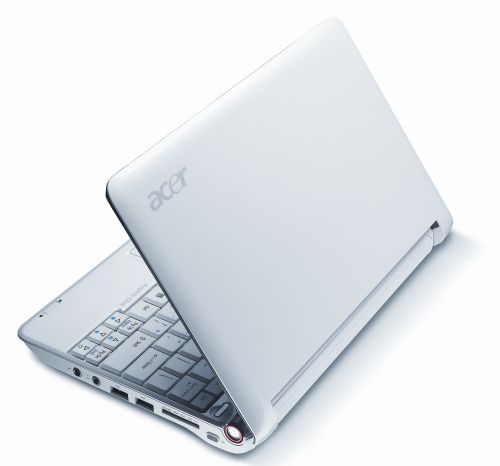 Now while it is primarily going to be Jenn’s machine, I will get to tinker with it.  Tonight I spent some time getting it on our network, downloading updates and then installing VNC so she can remote to her Mac.

Out of the gate the Aspire One is way more machine that the old clunky laptop we had.  Its fast, small, 11G wireless and has working sound.  It boots to the UI in about 20 seconds, but you’ve got to wait another 10 seconds or so for the wifi to connect.

One annoyance was the fact that the initial setup process doesn’t allow for passwords with punctuation in them – I fixed that by getting into the terminal and changing the initial password.

The process to do that is as follows: Go to Files > My Documents to open the File Manager. Then go to File > Terminal.  Its actually pretty trivial, but this is the gateway into adding more software.

Once in the terminal you can modify the XCFE settings by running the xfce-setting-show command: Click on Desktop to get to the Desktop Preferences and choose the Behavior tab. Now mark under Menus the Show desktop menu on right click option and close the window.  Once you’re done here, right click one the desktop background will bring up the Desktop Menu.

The Aspire One users call the above the “Advanced Mode” hack.  The primary reason to do it is to enable the Add/Remove Programs function (the Package Manager).

Now before you get going, you will want to fix the root password.  Thankfully this is trivial: Simply launch a terminal and sudo bash to get a root shell, then use passwd to fix things.

At this point you can run the package manager from the Desktop Menu, provide the root password and away you go.  As I mentioned, I chose to install a VNC viewer.  This worked fine, but the normal home screen menus did not pick up the new application (the Desktop Menu did).

To modify the home screen menus you need to edit /home/user/.config/xfce4/desktop/group-app.xml and add a line something like:
<app sequence=”10″>/usr/share/applications/vncviewer.desktop</app>
You will need to reboot to get it to show up.

So far, its a very cool gadget for a fairly reasonable price.  Once we’ve had it a while, I’ll write up a proper review.