Our printer is plugged into the Mac as this is the primary machine we use for printing things.  My desktop is a Linux box, and until today I simply copied the files up to the network drive and printed them using the Mac.

network for Linux and Mac OS X which is pretty much the situation I have here at home.  I’ve been working on making the network the important thing, and the computers simply use the network services.  Eventually I may simply move the printer to be on the network and run off my Slug, but its easier to let the Mac just talk to it directly right now.

Enabling the Mac to share the attached printer is very simple.  From the Apple select System Preferences.  Then you want to find the Sharing icon and click on that.

The Sharing page is pretty self explanatory, but I’ve got some screenshots to make it painfully obvious if your not sure.  You want to check the box that says Printer Sharing.  Also check on the Firewall tab that you won’t have a problem with blocking the required ports. 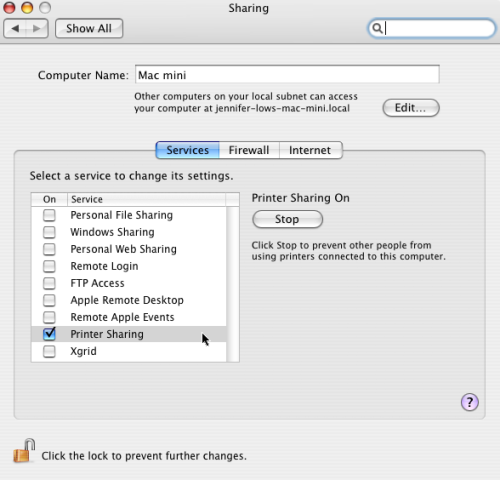 That’s all you need to do on the Mac. Now off to Linux.  I run Ubuntu, so other distros will have different paths to the same basic functionality.  Under System->Administration->Printing which will open up the printer configuration.  We want to add a New Printer. 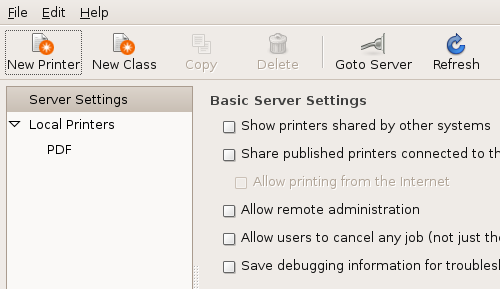 The new printer will be an IPP Printer.  Fill in the Host, then use the Find Queue button to locate the queue that the Mac is exporting.  I found that for whatever reason the system then mapped the hostname to localhost (127.0.0.1) which is wrong – so I manually changed it back.  Verify was good to check things were cool.

Now I can print from my Linux box.  I probably should have done this ages ago, if I had known how trivial it was going to be I would have done it much sooner.