Of course, once I got it out of the box – my first priority was getting it hooked up to see what it looked like. Here is the projector in a very temporary mounting on a TV table. 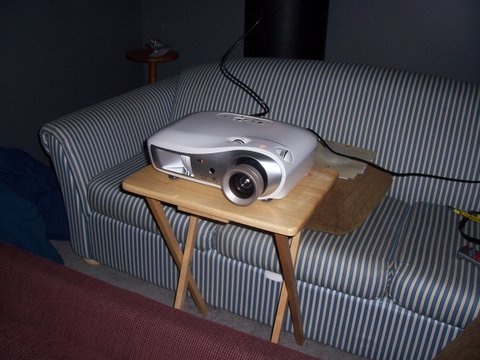 The vertical lens shift has quite an amazing range, this combined with the horizontal shift opens up a lot of mounting options. The zoom and focus rings move smoothly, and its easy to dial in a nice sharp image.

The projector seems to come with some home theater friendly factory defaults, which is nice to see. I did change from Theater Black 1 (default) to Theater Black 2. Switching the input connection from SVideo 480i to component 480p seemed to help the black level. I also enabled the dynamic iris which appears to be off by default. I did not bother to calibrate even the basic brightness/contrast – which will again improve things.

With the CRT projector, an all black screen (which often happen at the start of a film) would plunge the room into total darkness. As configured above, the 1080UB gives me a full screen gray rectangle for all black. It will take me a little time to get used to this, and I’m sure further tweaking will help improve this.

During movie playback of a 2.35:1 film, the black bars above and below are pretty good. You do get a shadow if you hold your hand up to block the light – but it is faint. Not as good as my CRT was, but close enough that I’m pretty happy with the performance.

Near black detail is better than my CRT was. This is certainly due to some of the black crush issues I was having with the CRT video chain.

The colours are quite different than my CRT, I look forward to measuring and calibrating this projector. The 1920×1080 resolution is awesome, I can see pixel structure from ~4feet but nothing from my closest seating distance. The panel convergence seems pretty good – less than 1pixel I believe – blue is the most off, and humans can’t see blue very well anyways. I think I spotted a very small dust blob (less than a pixel in size) – might just be something to learn to live with, I could only see it inches from the screen.

The resulting picture has plenty of wow.

I spent less than an hour watching the new projector – it still needs a bit of a break in period to burn off that new electronic component smell. Overall, I’m very pleased with the purchase – and I’m really glad that I don’t have the CRT to A/B compare since I certain that I’d have some buyers regret if I started down that path. The UB doesn’t provide CRT like black level – but it does not disappoint. Its a nice shiny new toy, and I’ve got lots to do before it is fully tweaked – so call me a happy camper.