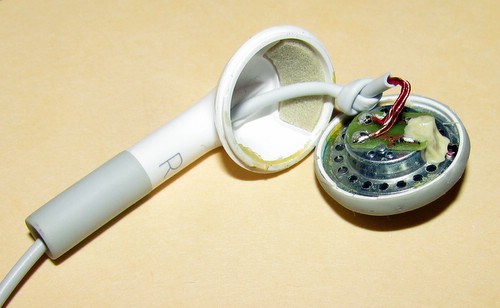 The other day my iPod ‘stock’ earbuds stopped working correctly.  At first I thought it might be something wrong with my ear, since the volume on the right side was so much lower than the left.  I swapped the buds around and the low volume followed – so it wasn’t my ears.  Next worry was that my iPod had gotten sick, but a quick check with another set of headphones and I knew I was ok.

While the stock iPod headphones aren’t anything special, I’ve grown to like them.  They are actually well matched to the iPod itself which I find to have background hiss when used with better headphones.  Most of my listening is done at about 1/3 volume anyways – I did enough damage to my hearing as a teenager, I like to pretend I’m smarter now.

Of course I had to take them apart to fix them.  Initially I had no idea how to open them up, searching around found me this posting on taking the older style apart.  It wasn’t until today that I found this video – but I had already figured it out myself.  In the picture above, you can see the two parts.  A little pressure with your thumb nail on the  joint and it will pop apart nicely.

Once I had them apart – I tested them to see if the problem was still there, so I could poke at the wires to see what was wrong.  They worked fine – no fiddling required.  So I simply popped the earbud back together and its been working normally since.  I suspect that the two wires had gotten twisted and were rubbing causing a short, but who knows.

Sometimes things just need to be taken apart and put back together.

One thought on “iPod earbuds disassembled”