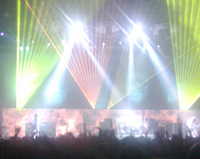 Tool played the K-ROCK Centre in Kingston on Aug 4th.  The opening act was Tweak Bird – who managed to generate and impressive amount of sound with their 2 primary members (a 3rd joined them for a couple of songs on various ‘odd for a heavy metal band’ instruments: flute, sax).  If you want a sample of what they sounded like check out their MySpace page.

This was the 2nd time I’ve seen Tool in concert, and this was a very different experience than the last.  The 1st show I saw was in Ottawa at the Corel Centre, a much larger venue.  Also, this time we were in general admission (on the floor) vs. in seats.

The K-ROCK Centre has a concert capacity of 6500.  It was clear from the number of empty seats that this was not a sold out show, I’d guess it was somewhere under 6000 people. 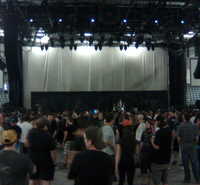 On the left is a picture I took before the opening act – it gives you a sense of how small this venue is and how close we were to the stage (this was 3/4 of the way back from the stage).  The general (floor) crowd did get more tightly packed once Tool took the stage, but we ended up standing closer (about 1/2 between the sound board and the stage) and there wasn’t a crazy crush around us.  To be able to see a band like Tool in such a small venue was pretty amazing.

Tweak Bird was LOUD.  Tool was LOUDER.  I was glad to have my earplugs, but don’t get me wrong – I expect a concert like this to be very loud.  Feeling the bassline inside your chest is part of the experience.  Tool put on a great concert.  For more, check out these reviews of the Toronto show.