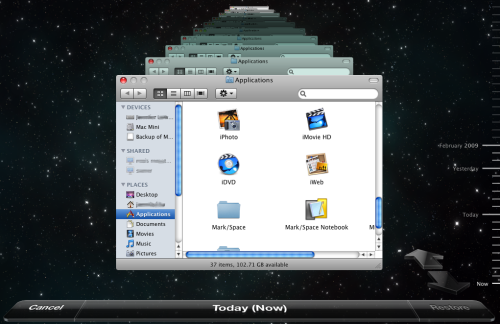 Once I had managed to get Leopard up and going on the mac mini with all of the user settings copied over, it was time to start exploring new features.  Time Machine was first on the list – but I wanted to have it back up over the network to my Ubuntu Linux server.  I probably took the long route to a solution, but what I have seems to be working.  The two main parts of getting time machine to work are: a) make it so the Mac can see the network storage b) trick time machine into using it as a destination.

Part A – I believe that you can use a non-AFP network storage solution (and my Mac can see my Samba volumes for shared files) but I went the route of enabling AFP.  This is based on instructions found here, but I’ll repeat it here with my comments:

At this point your Mac should be able to discover the service and see the volume as a shared drive.

Part B – Tricking the Mac into using this volume as a backup.  You may not need to do any of the work in Part A at all as is evidenced by other people claiming success on the net.

Time Machine is pretty weird.  I had assumed (wrongly) that it simply gave you a file view in time.  It turns out that many of the Mac applications are time machine aware, and will show you a views of the past.  For example, you can view your email through time and recover the mailbox from the past.

[Edit: April 2013 – it’s been some time since I stopped using this solution. I experienced this failing twice for me in basically the same manner. When the timemachine volume would get full my backup would stop being accessible. Instead of spend more time figuring out what exactly was wrong, I’ve moved onto an rsync (rsnapshot) based solution].