A bit of an absence from updating the blog over the past month, due primarily to being busy with work/home.  I hope to get back to my regular cadence of something every week or so, and I’m going to start with something lighthearted.  There are several more technical articles I’ve got on the go, hopefully I’ll get those cleaned up and ready to post soon. 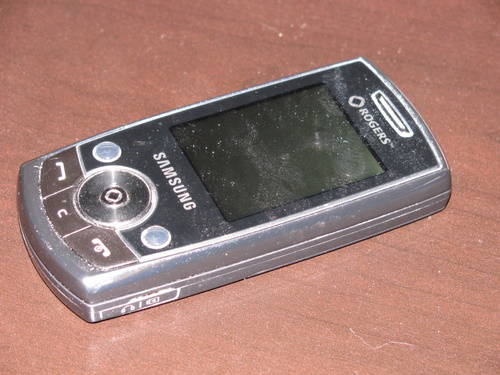 Late last summer we headed west to Vancouver Island, this is a regular trip as many of my relatives are out that way.  We took a break from visiting family and spent some time in Parksville, specifically down on Rathtrevor Beach.  The first morning we were there, I took a walk with my daughter as the tide was out.  Not five minutes from the cabin I came across a cell phone (pictured above) sitting on the wet sand.

Not seeing anyone around for literally miles, there was a very slim chance I was going to get this back to the owner.  I figured I’d see if it was in working shape or not.  Turns out it didn’t work, and was likely pretty water logged.  Popping it open let me determine the exact model number (Samsung SGH-J706), and based on the SIM card which revealed the carrier it appeared to be a pay as you go phone.

Things started to seem grim when I took a look at the charge port on the phone, not a great sign to see corrosion and salt build up.  It was pretty clear this was very likely junk, but I couldn’t just pitch it into the trash.  It ended up coming home with me where I got a chance to open it up [you could probably tell that was coming..]

The J706 is a slider phone, the screen slides up to reveal a keyboard underneath.  Pretty slick, and I can’t help but think back to The Matrix whenever I have one of these in my hand.  Disassembling the slider was educational, I was able to take it all apart – and put it back together.

Unfortunately, once I had it apart it was pretty clear this wasn’t ever going to work again.  I often wonder if its possible to repair phones that have gotten wet (you see these on eBay from time to time) but a good soak in saltwater looks like a one way ticket for electronics.  The LCD screen seems to have been fairly well sealed, and some of the parts may have been in a working state as well – but it should be evident from the photo that much of it was a complete write-off.

Reassembled and cleaned up, it looked cosmetically fine.  The slider mechanism worked smoothly too.  In the end, I took it into BestBuy’s cell phone trade-in program: I figured that at least they could recycle it properly.  I was up-front with them about the non-working condition of the phone, and they did check it for water damage (there is a little indicator under the battery usually).  The representative told me if it had been in working shape it was worth $60, I figured that was the end of the conversation and told him just to recycle it – but he stopped me and said, let’s see what I can give you for it.  Turns out it was worth $7.61 – I walked away with a gift card feeling pretty lucky.