When I was a teenager and into my early 20’s my computer gear was always bleeding edge.  If I had forgone most of the computer gear, I probably could have had a car during university – but having the coolest setup was what it was all about. Once I started work full-time, my work supplied hardware far outpaced what I could justify at home. Somewhere between then and my 30’s I lost the drive to have the coolest stuff and got by with trailing edge gear. Until recently my desktop was a refurbished Celeron 3.06GHz machine that I picked up a couple of years ago for $200.

The issue is that even a horribly dated machine can still run everything you need, just not very fast. Especially given that your average home computing is about surfing the web and maybe some simple file management (let’s ignore the gamer machine which is a totally different story). Having recently upgraded Jenn to a dual core iMac, and also getting a dual-core laptop for work – the celeron was feeling really slow. The straw that broke the camels back was the insanely poor performance of iTunes under VMWare hosting WindowsXP.

Trent had pointed me at techreport.com, specifically the system guide as a good source for reviews and advice. I had initially thought I’d get an AMD based system until the introduction of the lower cost Core i3 early this year. After some extensive online pricing/shopping I settled on a very frugal upgrade plan. 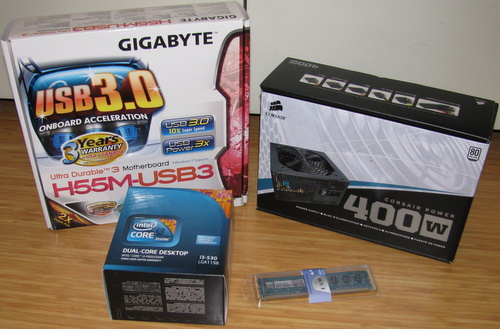 Initially I had planned to re-use the current mid-tower case my celeron system was in, however the front panel plug connectors were not compatible and I didn’t want to start splicing wires to hack things to fit. (Leaving the case intact, gives me a completely functional but slower machine to pass on)

At the top of this post the picture is a close up of the i3 chip installed on the motherboard prior to the installation of the CPU heat sink/fan. If you haven’t built a system from the ground up previously, it may look complicated but its really quite simple. I chose to install the CPU/heat sink prior to installing the motherboard into the case.

Some of my friends teased me for only going with 2GB of RAM, but with my Ubuntu based desktop and my usage (even with VMWare hosting WindowsXP) I rarely use even half of my RAM. I do plan to upgrade to more in the future (6GB or more) but I’m waiting for the price of DDR3 to drop to a reasonable cost. The single 2GB stick was cheaper than some of the 2x1GB options and provides the most flexibility for later upgrades. 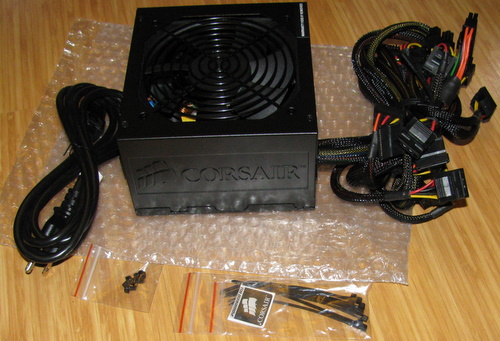 The power supply was a bit of a pleasant surprise. It came with cable ties, nylon sleeved cables, and a power cord. This power supply is also 80+ certified which was one of my requirements for a new power supply. The single large fan keeps the noise level to a minimum.

My motherboard selection was based primarily on the techreport.com recommendation.  However, this is one of the few USB3.0 capable motherboards that offers integrated graphics support (when used with i3 or i5 processors).  It has 4 slots of DDR3 memory (up to 16GB), Gigabit ethernet, PCI Express x16, IDE and SATA support as well as external SATA. This is a great foundation for my new system allowing plenty of future expandability.  The only feature I noticed it was missing was SATA3.

Future upgrades will be to add a graphics card, a large SATA drive and of course more RAM. Looking further into the future, I may consider upgrading to an i7 when the prices drop. While this is still a budget system, it has legs and I’m back on the leading edge for a short while.

One thought on “Core i3 frugal upgrade”