The idea of Earth Hour might seem a little gimmicky due to the media attention, but it is an effective demonstration that little things add up and can make a big difference. The 8:30-9:30 pm timeslot wasn’t going to work with our kids who needed to be in bed well before then, so we decided to observe the hour from 6:30-7:30pm (you should see us on New Years eve, doing the count down at 9pm!).

At the top of this posting is a graph from the TED 5000 over the time period.  The red line is voltage, which ideally would be a flat line at 120v.  Today it seems the voltage varied from 121v to 123v.  The blue line is the power in kW being consumed.  Today was a laundry day (seems to always  be laundry day lately) and while we have energy efficient appliances, the dryer still eats a lot of watts.

So after dinner, we took a reading using the Ted-O-Meter o 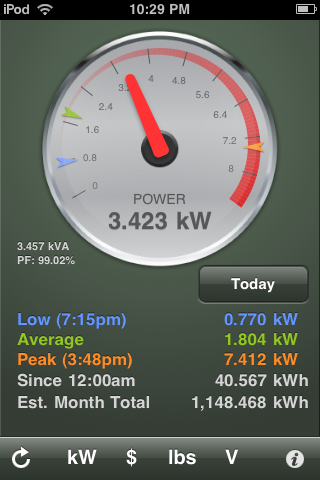 n the iTouch we saw that our consumption was around 1.9kW.  On the graph this would be roughly above the word “Data” in the “Real-Time Minute Data”. We then went around the house turning off lights, and powering down stuff that didn’t need to be on (computers, PVRs, etc).  On the list of non-essential items were the stereo, pretty much anything with a wall wart, and night-lights too. When we looked again we had dropped down to 0.9kW.  After that it was bedtime for the kids, and we left things “dark” until 10pm when it was time to start up the dryer again and do a few things before going to sleep.  (Ok, I was sitting in the dark surfing on my new G1)

The TED 5000 combined with the Ted-O-Meter is a great way to bring awareness to you and your family about changing little things to make a difference.  To be able to turn off the lights in a room, and see the needle drop is very motivating.  You can see from the screen capture on the right that we managed to hit a consumption low of 0.770kW at 7:15pm today.

The computer industry has embraced “green” as there is a direct correlation between energy costs (primarily cooling) and profit. We’re not quite there for the home, but I suspect it will come once more people can easily measure their usage and effect change.