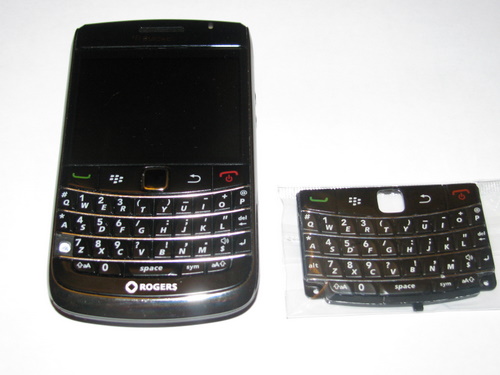 My brother in-law managed to lose the ALT key from his BlackBerry Bold 9700. He had been living with the lack of the key for some time as he didn’t realize how cheap it would be to replace it. I was happy to do the work simply because it let me take a new device apart.

Off to eBay for a new keyboard. There were many options. The prices ranged from $3 shipping included, $8 from a USA based source, or $12 within Canada (you can pay much more if you want). Lately I’ve had some trouble with shipments from China taking 60 days (or more) and my brother in-law was happy to pay a bit more to get the part sooner so we went with the $12 part.

A bit of searching located a good textual description of how to replace the keyboard on a 9700. The same thread references a youtube clip that provides a visual of the disassembly. You’ll need a Torx T5 and either slightly long fingernails, or some sort of plastic pry tool. Unfortunately my trusty micro-tip set from Lee Valley failed me here, the smallest Torx driver it has is a T6 – I cheated and used a small flathead from another micro screwdriver set which seemed to work ok.

The first step should be to remove the back and battery. You can leave the SIM and microSD cards in place. 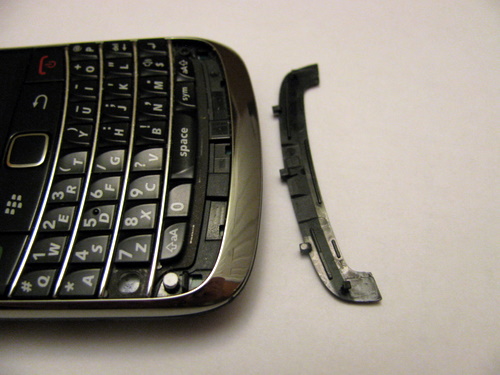 Now we remove the bottom cover. This felt really tricky, but as we get further we’ll discover this is the easy part. Pry using your fingernail or the plastic pry tool under the “tops of the U-shape” on either side, releasing one side then the other.

You can see the two exposed screws. The lower one (in the picture) has a white dot on it, this is the tamper proof sticker. Some people have been able to slide this onto a razer blade / exacto knife and have been able to preserve the sticker. I tried, but it tore partially. In the end I just trashed it. Remove the two screws. 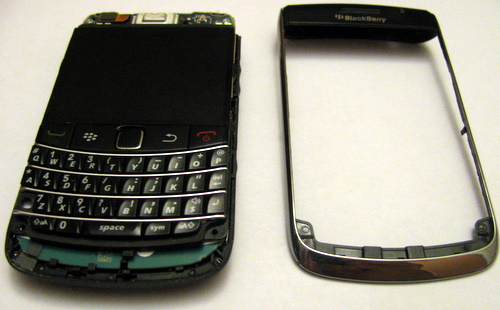 Removing the bezel was the tricky part. I found this youtube video to be the most instructive. You start by popping up the bottom lip (the part held down by the screws we took out). Then you need to free the clips on either side of the screen. These come free best by working outwards from the screen. Once the bottom half is free, then the top part pops / slides upwards on the phone. It took me a good 15 minutes of gentle prying and poking to determine how it came off, but once I had it sorted out it was quite easy to do again. Some folk do manage to ruin the bezel doing this procedure, so I’d suggest working as carefully as possible – you can always purchase a replacement if needed.

At this point swapping the keyboard is trivial. Re-assembly is quite simple. Again the bezel is the tricky part. Press the bezel down onto the phone 1st, then once it is in place you’ll want to squeeze the sides inwards to set the bezel correctly. Things should all click into place easily.

I ended up taking the phone apart and reassembling it twice. The second time was quite easy, once I had the feel for it. This is easier than taking an iPod apart, but harder than the Nokia 5310 mostly because of the bezel. 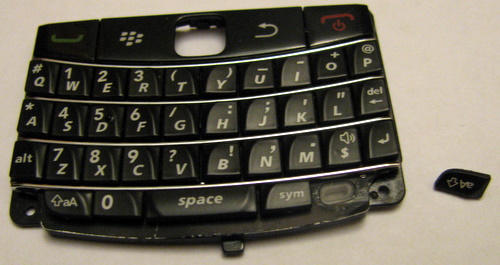 One of the keys on the new keyboard simply fell out. This wasn’t a huge problem as a little super glue and the key was back in place. The keyboard is made up of the frame, a rubber membrane, and the keys. The membrane allows the keys to move within the frame. The key that fell out wasn’t properly bonded to the membrane. I’ve held onto the old keyboard in case more keys go missing. The original problem was a missing ALT key, but in that case the rubber membrane had torn away as well.

Above you can see the second problem, and what led me to disassemble the phone a 2nd time. The ALT key pictured above on the right is raised more than the keys around it. I thought that maybe there was something jammed under the key preventing it from lying flat. Upon inspection it appears that it is a manufacturing defect.

Certainly worth doing. While I had issues with the part quality, I suspect this was just bad luck. The slightly raised ALT key functions fine and really isn’t a big deal.

2 thoughts on “How To: Replace BlackBerry 9700 Keyboard”