Back in July of 2008 I picked up an Acer AspireOne, one of the first netbooks. Since netbooks have been mostly dropped in favor of tablets, you can pick up a netbook around the $200 price point. Most netbooks seem to take DDR2 laptop RAM, and this can be found on the used market fairly cheap. The 512MB pictured above was $5.

The AspireOne continues to be a useful machine, I’ve recently moved over to the netbook remix for Ubuntu. It does suffer from limited screen real estate, a very slow solid state drive, and prior to the upgrade – only 512MB of RAM. Doubling the RAM for $5 seemed too tempting, especially since it gave me a good excuse to take it apart.

Read on for the gory tear down details.. 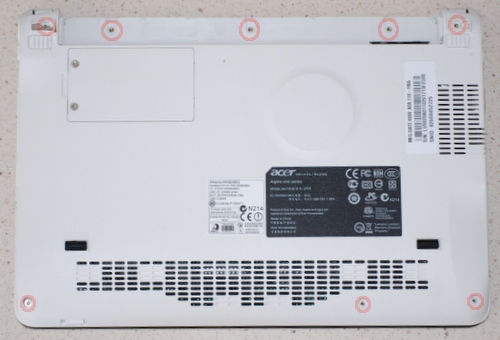 We start on the underside of the case. There are 8 screws that I’ve indicated in the picture with a faint red circle. Three of them are hidden by the battery which you’ll need to remove as part of disassembly. In terms of tools, you’ll need a small phillips screwdriver and possibly a very fine flathead screwdriver or similar thin tool for some (careful) prying.

The keyboard is next. This is where you’ll want that thin flathead or similar. There are three tabs at the top holding the keyboard in. Go gently, but it should be obvious what you need to do to free the keyboard – just push the black tabs towards the back of the computer. Once they are free, you’ll need to also release the two clips on the side. The case will have a bit of give and let that happen fairly easily. I found removing the keyboard pretty straight forward once I realized how important the side clips were. 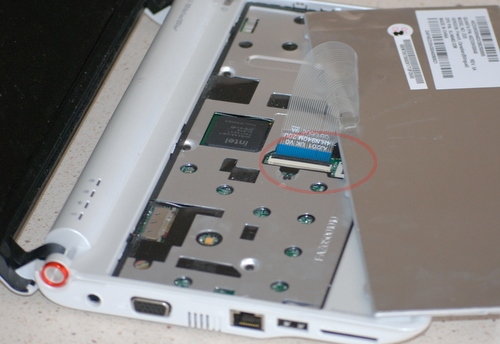 The keyboard is attached to the mainboard with a ribbon cable. Gently flip the black lock upwards and the cable should easily slide out. Similarly the track pad needs to be released as well – since we’re about to remove it next. The track pad connector is towards the front of the computer from the keyboard connector. 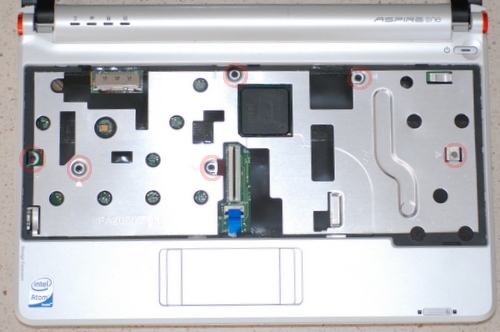 More screws to remove. There are 6, again indicated with faint red circles. Once these are removed, you should be able to remove the top half of the case entirely. I found this tricky to accomplish, the front side didn’t seem to want to click out. I ended up freeing the back side first, then using some gentle force to get things to come free. With any disassembly, always double check you’ve removed enough screws and be gentle. Trying different angles is sometimes a good solution too. 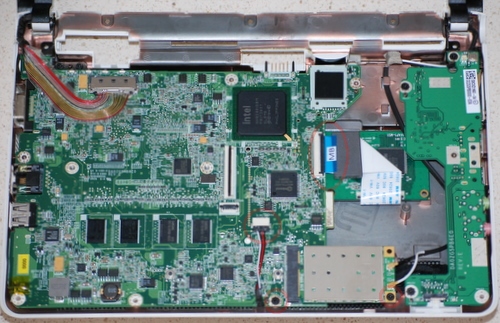 We’re almost there, the RAM slot is underneath the motherboard. Clearly designed such that a memory access door could exist on the bottom of the case – but the AspireOne has no door. We’re going to be lifting up the circuit board that occupies the left 2/3rds of the picture above. There are 2 screws (circled in faint red). One is near the center of the computer at the front edge, the second one is holding down the wifi card which will probably come free once the screw is removed. You’ll also need to release the audio cable and ribbon cable for the drive (both circled in faint red). 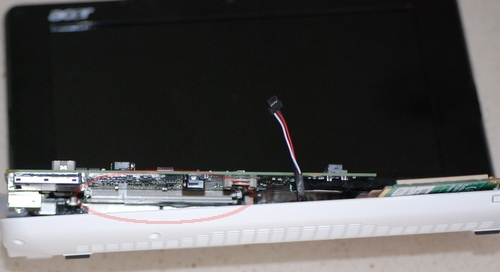 The board should lift up easily. It may take a little wiggling to get things freed up. There are other cables attached that will prevent removal of the board, but you can lift it up much higher than is pictured here – plenty of room to get to the RAM slot (circled in faint red).

Reassembly is basically the reverse. The ribbon cable for the drive was a little tricky, there was a stiff plastic guide that helps keep it in place, but was getting in the way of getting it into place. Again, patience and care is rewarded. 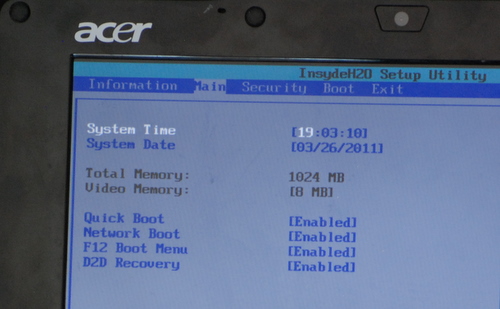 Since there is only 1 memory slot, and due to limitations of the mainboard the most RAM the AspireOne can take is 1.5Gb – 512MB on the mainboard and 1Gb as a memory module.

Compared to some things I’ve taken apart recently, there were a lot of screws. The unit felt very solid, and I think I’m happier with screws than lots of tricky snaps (or worse, glue). There is clearly room for a slightly larger drive unit, or a GPS.

I do need to credit and old article from CrunchGear that has a very similar write up, it was a great reference. The forum at http://www.aspireoneuser.com/ is also a very useful resource.