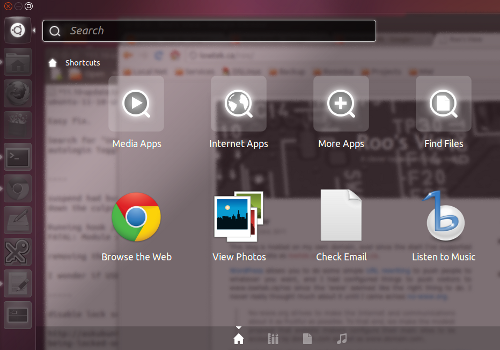 I’ve been running Ubuntu as my home desktop for quite some time, and it’s been at least a couple of years since I did a clean install. I’ve moved motherboards and drives over that time and upgraded the distribution many times. Generally the upgrades resulted in improvements. Moving to 11.04 (Natty Narwhal) resulted in a change to the new Unity interface, I had seen and used it previously on a netbook so it wasn’t completely new to me. Having only recently upgraded to 11.10 a few things busted which I’ll write about here. I’ll focus on things that I noticed breaking between 11.04 and 11.10, but some of the tips will apply in general.

Some of these issues will be due to my avoidance of doing a fresh install, if you’re really stuck – make a backup and do a fresh install and work forwards. One day I’ll get organized enough to build a script that lets me restore my preferred state “fresh” from a clean install – a lot of that script could likely be built by introspecting the current install. More likely is that people will push most of their data into “the cloud” and the desktop will become pretty much throw-away. My Android phone is starting to work a lot like that it seems (but I rebuild it from a clean install more often than I want to admit).

Issue 1 – Automatic login. I rarely reboot my machine, but when I do I don’t want to be bothered with a login. For my personal desktop I’m ok with the less secure mode (work is a different story). This busted in 11.10, fortunately the fix was out there.

Search for "User Accounts" application. Select the account you want to autologin Toggle the Automatic Login switch to On

Issue 2 – Suspend stopped working in 11.10, well as I rarely reboot/power off – I need my machine to suspend. Attempts to suspend would appear to almost suspend, but immediately resume to the lock screen. Looking at the log file /var/log/pm-suspend.log helped me spot something odd:

The log didn’t indicate this was causing a problem, but it seemed suspicious. I had added this file when I got the Core i3 as suspend wasn’t working. Well, it turns out removing this file fixes my suspend problem.

Issue 3 – I now needed to disable the lock screen on resume. This took a bit more digging to find the solution to, but again it was very simple once I found it. Simply run the following in a terminal.

In 11.10 the default mail application is now Thunderbird, which I used to use back when I was on Windows XP but stuck it out with Evolution when I moved to Ubuntu. I haven’t switched so I’m still on Evolution, but it’s clear Evolution isn’t quite right in 11.10 or the settings migration due to change in db shape was busted. I’ll have to sort that out at one point.

When I moved over to Unity in 11.04, I was missing a couple of the nice task bar indicators. I found Caffeine 2.2 to give me support for disabling auto sleep, and System Load Indicator 0.2 for some stats on the task bar.

I’ll toss out one other link to tweaks by Steve Klondik, I didn’t use any but it was a good reference.