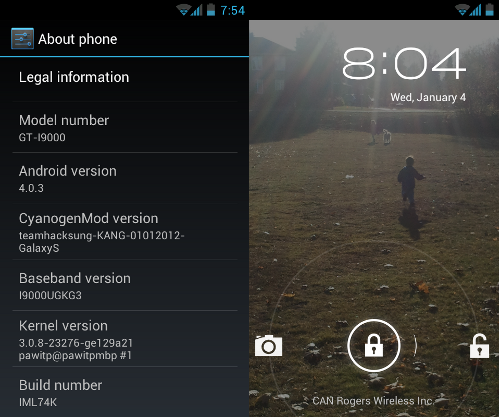 One of the things that I look for in a phone is community support. For me there are two main reasons this is important: 1) It’s nice to have a large group of people you can ask questions of, or an active forum you can search for answers on 2) When later versions of Android are released, that community will hopefully build a version for your phone.

If you’ve been watching the tech news, there have been rumors that Samsung will support Ice Cream Sandwich (ICS) on the Samsung Galaxy S (SGS) and claims that it won’t. The latest news appears to be that they will not upgrade the device, a bit sad as it was only released 18 months ago. So not even kept current through the length of most cell company contracts. This is one area where the iPhone has done right for the consumer.

If you’re interested in getting ICS for your i9000 (or in my case the i9000m) skip over to the XDA Forum and read through the huge thread. The team behind it are the same folk who helped bring CyanogenMod to the SGS originally and are now working on CM9. This is an alpha, there will be rough edges and I don’t suggest people leap in unless they are very brave.

I originally tried Build 11 and that didn’t work well enough for me to switch from the 7.1 stable I was on but it was close. Build 12 appears to be quite good, with a few changes I needed to make for my usage, specifically adding dropbear (SSHD) and rsync so I can do nightly backups (which I’ll talk about at the end of this post).

The forum thread has these instructions for people coming from CM7

I would recommend that you consider getting CM7 first, it’s a good base to work from and there will be better how to and help to get it working. Experience there will translate over to working with the ICS Alpha.

Here are my steps I used when moving to ICS .

There is a list of known issues in the main thread, you can post bug reports there but please search the thread so you don’t ask something obvious. There is another thread for discussion (ie: anything that is not a bug report).

Each time I’ve done this type of upgrade I seem to get burned by the Android Market treating the new ROM as if it were a new device, thus it doesn’t restore any of my apps. Good thing I had taken a backup of the list above. Having done this a few times, using a desktop web browser to the Market and installing from there to my phone is much faster.

My experience so far

Why it’s still an alpha

So far no major issues. Only 1 of the ~50 apps I use indicated it wasn’t compatible – and I’m sure that’s just how they’ve tagged it in the market. The battery life appears to be about the same as CM 7.1.

One observation was my modem didn’t change from KG3 unlike my experience flashing CM7 where the modem did change, it seems my understanding of how the modem is updated (or not) is flawed.

I also briefly tried out a pure AOSP from Onecosmic and while it seems a bit more mature than the CM9 Alpha, it didn’t fit what I wanted (personal taste).

Getting SSHD and rsync working

I had previously written about getting SSHD working on CM7.1 and that I used rsnapshot to do incremental nightly backups of my phone. This has saved me at least once when my phone got very sick and needed to be wipe and freshly installed, having a day old backup was nice. Also when going from version to version I’m able to grab configuration details like the dropbear configuration – this allows me to reuse the same keyed ssh login without having to repeat the entire setup.

The ICS Alpha was missing dropbear. It turns out that the version from CM7.1 can be used – I specifically picked the ones from nightly build 181.

First you need to remount the /system filesystem to be read-write.

Grab dropbear, dropbearkey and rsync and put them in /system/xbin. Make sure to use chmod 755 on them to make them executable. Probably a good idea to reboot after this.

As I’m going to re-use my configuration files from my backup, I don’t need to use the setup steps from my blog post – I just use the abbreviated version below, but if you’re doing this clean follow the original write up.

Copy the following files from backup to the phone

Then just fix the permissions

The ICS Alpha is also missing the ability to set the hostname, you can hack around it by using the following command.

And of course, we need to launch dropbear

I still need to figure out how to get these into a script that will run on reboot, for now I’m just doing the last two command manually after every reboot.