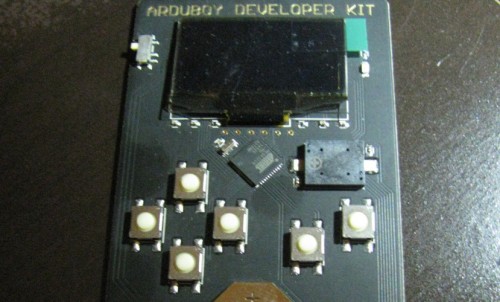 When I saw Arduboy on KickStarter I knew I had to get a couple. Micro-controllers & retro-gaming in a teeny-tiny package. The KickStarter rewards haven’t shipped yet, but when I saw that there were going to be Dev kits available on tindie I leapt at the chance to get my hands on some hardware. I’m really glad they decided to make more Dev kits than were needed to fulfil the Kickstarter.

While the device can be run on a CR 2016 battery, it will also power up via micro-USB cable. The device ships with a breakout game (ArduBreakout) installed, so you just have to power it on to have some black & white retro gaming fun.

So now what? Well, of course we want to get setup to write some code and run it on this thing. Luckily there is a community site with instructions.

My desktop is Ubuntu, so here’s what I needed to do:

Then you’ll want to go to GitHub to grab the Arduboy library and some examples.

Launch the Arudino IDE and load up one of the examples (FloatyBall, a Flappy Bird game)

At this point I just wanted to stay up all night hacking code..

More games can be found on the community site.