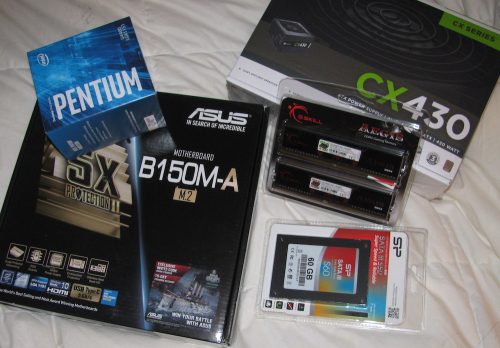 I’ve been on and off for nearly 2 years talking about getting new hardware for the server that runs lowtek.ca. The current server is a modest Atom based board with only 2GB of RAM, I’m pretty sure my phone has more compute power. My reasons for upgrading were mostly so I could move over to using a Docker based deployment, having done a bunch of Docker things for work – I’ve really gotten to like it for managing software stacks. The Atom chip doesn’t support some of the virtualization that is needed, heck – it’s also a 32bit system only. Stalling on buying new hardware wasn’t all that hard, there was always other priorities. Then I discovered the current server was put together 7 years ago! Worse, the IDE drive that is the boot volume is older than that.. Clearly I have a ticking time bomb for a server.

I wanted to get a skylake processor, but was happy to stick with an entry level Pentium – it will let me run all the software I care about and while it’s not the fastest, it will be much much faster than the Atom. I wanted 4 RAM slots on the motherboard, I figure 16GB now – with the potential to double that later. I also needed 6 SATA ports (Raid 5 + boot drive), and if I need to get more I’ll buy a PCIe SATA extension port. I went ASUS based on their durability reputation. I picked up a new power supply (because who wants to trust one that is already 7 years old), and a cheap SSD drive which will be much more reliable than any spinning platter.

If you follow the links, you’ll notice that the first 3 are CanadaComputers and the last two are newegg.ca. I usually buy from CanadaComputers, but while they list the G4400 online you can’t actually buy it at the store. If I’m buying something online, well – newegg.ca is as good as anywhere, and they not only had the G4400 cheaper, they also had a crazy clear out price on the SSD ($37.99).

I'm such a geek. Just sliced my finger open on a CPU heatsink. #ouch

The build went smoothly, I was able to re-use an old Dell PC case to house the new hardware temporarily. I had a 3.5″ adapter for the SSD kicking around, and the motherboard came with a couple of SATA cables.

Getting an OS installed proved to be a bit trickier. Something funky is wrong with my desktop Ubuntu, downloads with Chrome are often corrupted (md5sum fails). The 16.10 Ubuntu install even when it is a correct download, will not self check it’s files correctly AND while I could boot it from USB, I couldn’t get it to install on my new hardware.

I believe the problem is something to do with the newer kernel level, but given that 16.04 is the LTS version and what I’ll be running on the server anyways, it’s not worth banging my head on this problem further.

All in, I spent a bit more than $400 CAD and have a couple of rebates in the mail. Not bad as I’ll probably run this hardware for at least 5 years, and it’ll be a much needed upgrade.

Next up – I need to install the server version and start building out the software stack that will take over the current servers functionality. Once that is mostly ready, it’ll be time to do a hardware swap into the real server case that has all of the drives in it.