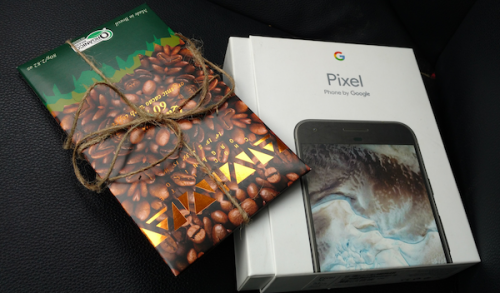 On average I upgrade my phone every 18 months. Sometimes I’ll hang onto a phone for 2 years, and other times it’s much less than that. My most recent phone I used for about 2 years – the Motorola X Play. It was a great fit for me, huge battery, headphone jack, SD card support for more storage and the camera was pretty good. I have for many years bought used phones, avoiding the high prices for new devices and still enjoying a regular flow of great hardware. The Moto X Play was great, it did everything I needed and I really didn’t have a strong urge to upgrade.

Buying used phones, means I’ve always got my eye on the used market. I’ve usually scoped out the set of possible phones I’d consider owning and watch for the street prices to drop under $200, my personal sweet spot for buying a phone. I think it was near the end of last year that the original Google Pixel started to dip into that range locally, and I got a recently refurbished from Google version from someone for a great price. This phone went to Jenn, who had been struggling a little with her Moto X Play and I knew she wanted a better camera.

This of course started me on the slippery slope of wanting a Pixel for myself. Still, prices were fairly high and the Moto X Play did everything I needed. The one thing that the Motorola didn’t have was a fingerprint reader, and this is a nice feature to have as my work apps require long passwords OR biometric access. When I wear my tinfoil hat, I’m not a big fan of fingerprint access – too easy to fool and impossible to change once you’ve run out of fingers and toes. On the other hand, accessing my phone is super fast and easy with a fingerprint vs. typing a really long password in every time.

Then I spotted a Pixel XL with 128GB of storage, but a cracked back glass. They were asking more than I was willing to pay, but the darn listing sat there for a couple of days and ate away at me. I offered quite a bit less than asking to knock it down below my $200 ceiling – it was a bit of a low ball price, but fair enough considering the damage to the phone, and I wasn’t willing to pay more than that.

Wouldn’t you know it, they accepted my offer. I almost walked away from this deal too, because the first time I was supposed to meet up to buy it – they had a schedule mix up and were a no show. That’s usually a sign to say that something isn’t right and it’s a bad deal. They were very apologetic, and I decided to meet up a couple of hours later – where they apologized again, included a nice craft chocolate bar, and knocked another $10 off the price! I have walked away from a couple of used sales where things didn’t feel right, but in this case aside from a schedule mess up there wasn’t anything off about this deal.

Recently Woot featured the same phone for $250 USD, now they are ‘brand new’ condition and come with a warranty, but I still think I’m laughing all the way to the bank with my find. Considering when the Pixel was first launched it was north of $1000, the depreciation as always has been harsh. While my used model may not have ‘like new’ battery life, I still get a solid day out of it.

The camera continues to be amazing, and 4GB of RAM makes a huge difference over the 2GB I had before. I also really like the AMOLED screens, which was one of the attractions to the Samsung Galaxy phones.

Of course, even though the Pixel has the latest version of Android on it (Pie) and looks like it may even get the next one, I went with a LineageOS build, I’ll have to write up that process later as it was a journey. On cold boot I get a pre-boot screen telling me dire things will happen because my boot loader is unlocked, but I can live with that.

It’s been over 9 weeks since I switched over to the Pixel, and I’m still in the honeymoon phase with it. I keep telling myself that I should really fix the back glass, but I’m not sure I’ll ever get to it.