Maybe it was the lack of sleep, but I decided to sign up with twitter.  Aside from Linked-In, I’ve avoided mostly all of the social networking sites (fads?) thus far.  Who knows, maybe I’ll break down and get a Facebook page soon.

Living in North America, and (oh my, I”m actually going to say it..) especially people of my generation don’t tend to use text messages (SMS).  There are a few friends at work and I who do text each other, but I generally use less than a handful a month.   I’d like to change that, and I think twitter may be the catalyst.

There are lots of way to use twitter, but at the moment I see it as a way to get that hallway conversation feeling across the wire.  I’ll likely use it to give mood updates, vent my frustrations and as a place to put my half baked thoughts that I don’t feel are worth a blog posting.  You might laugh, but I tend to spend about an hour or more on each of these blog entries – I’ll probably spend about 30seconds thinking about a tweet.

While a large part of my waking day I’m in front of a computer, there are times when all I have with me is my phone – a Nokia 5310.  Sure I have internet on my phone, but without a data plan it gets expensive fast ($13 for 460kb last month).  SMS is a natural fit for twitter’s short updates, too bad the Canadian cell providers aren’t twitter friendly. [edit: see comment below, seems that Canadians can twitter vis SMS as of very recently.  This makes my plan in the next paragraph basically just a neat idea, I’ll likely not do it.]

My plan is to build my own SMS gateway to twitter.  I can use SMS to send an email and there is a way to send a text message via the web to my phone, so I’ve got a two way conduit.  Now I just need a daemon to sit on my server and respond to events.. more on this once I figure out exactly what I’ll do.

Of course, twitter is a lonely place with no friends.  It turns out many of my friends are already out there on twitter (ok, so I’m a late adopter).  What did surprise me was that I started to follow some friends, and then suddenly I had followers!?  Well it turns out [obvious] that by default you get email when someone friends you, so two way connections shouldn’t be a surprise.  What was a little odd was that a few friends found me without me friending them, within hours.  Neat, I feel popular.

Now in terms of a client – there is always the web, but I wanted to play around with some of the twitter specific apps.  On Windows I installed Twitterlicious which has some quirks, but seems to do the job – I may later try twhirl.  On Ubuntu I’ve tried and failed so far to use gTwitter but will persist.  The neatest client I’ve tried so far is DSTwitter, turning my Nintendo DS into a twitter client. 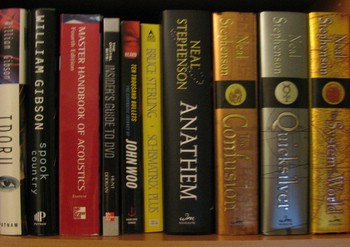 I read regularly – aside from spending countless hours in front of a computer screen I also like to sit down with a book.  My collection is pretty heavily skewed towards speculative fiction.  Similar to my DVD collection which I re-watch, I like to re-read books.  Some of the classics (Dune) I’ll read every couple of years, most go longer between reads – but there is hardly a book in my collection I haven’t read twice.

This year I’ve read a lot of Neal Stephenson’s work – having finally got my hands on the last two books in the Baroque Cycle, I re-read Quicksilver and worked my way through the whole series.  If you haven’t read any Neal Stephenson, start with Snow Crash.  Lots of his more recent work is more of a slog through, and the style won’t suit everyone – I personally enjoy it, but it does take a few hundred pages to get into.  I very recently finished Anathem – again, not for everyone, but I thought it was a great read.

There have also been a few eBooks I’ve read through.  I still really like having a physical book, so the eBooks I’ve read have been free ones – but there are some good free books out there, and its possibly going to get me hooked on eBooks.

I’ve been reading these on my NDS using dslibris.  Using OpenOffice.org to export to xhtml, I did have a problem with the export but found this helpful explaination that lead to the fix.  I did already have a java runtime installed, but OpenOffice.org needed to be configured to know about it.

Books are sort of like software, eBooks more so.  It is interesting to see what has happened to music through the digital revolution (mp3’s), and now we’re starting to see TV and Movies go through the same transformation.   What happens when matter assemblers become available?  Suddenly even physical objects will be trivial to replicate – once the cost gets driven down, what then?  Time to go read some fiction.. 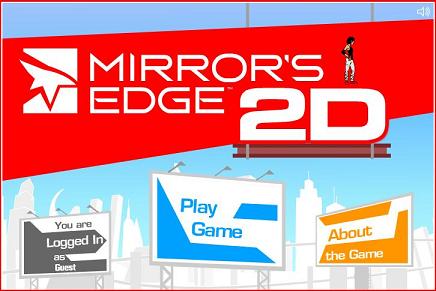 There has been lots of talk lately about “the cloud” – I was a little taken aback by this blog posting from Google which implied that Google is the cloud.  Pat also recently posted about web UIs that I’d recommend people check out.  I’ve been keeping an eye on some of the instant on OSes, and it turns out a friend of mine is involved with one of the companies offering a cloud solution.  I’ll admit that the cloud concept is very cool – but what I really want is to host my own cloud (and yes, that does seem a bit backward).

Let’s get back to what computers are good at – entertaining us.  If you haven’t seen this yet, you need to check out mirrorsedge2d.com – a pretty neat flash based game that is a 2D take on Mirrors Edge.  It only take about 30mins of toying around to exhaust the content on the beta site right now, but if you enjoy 2d platformer games this will hook you.

The other night my internet connection was down for about 30 minutes.  How annoying will that be once all our data is in the cloud?