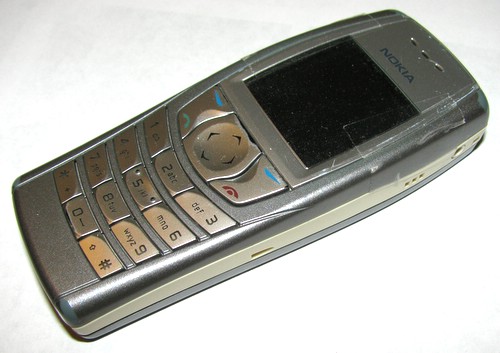 This post is inspired by Bunnie’s Exit Review of his Blackberry, he also did one for his Thinkpad T60.  The concept is a good one, often our new gadget purchases are based on our personal past experiences as much as they are influenced by our friends and “the latest new thing”.

From the picture above, you can see that its had a hard life.  The paint is rubbing off on the corners, the keypad is starting to show black plastic under the chipped keys and the screen is held on with some scotch tape.  This phone has survived countless high impact falls to the floor, a few to pavement- and a handful that resulted in a yard sale style disassembly upon impact.

Via eBay I did pick up the headset (with integrated radio antenna) which served me well.  Both the speaker phone and headset voice quality were such that I could be on a business conference call and people couldn’t tell that I wasn’t on my office phone.  As for extras, there wasn’t much to rave about.  The web browser would quickly drain your battery.  The screen 128×128 resolution and 4096 colours was poor.  The embedded java was only MIDP1.0.  The radio was a neat addition, but I never used it.

This phone does have an IRDA port on it.  This let me synchronize my contacts with a PC with the Nokia PC Suite.  I could also store pictures (low quality due to the display) on the phone to customize it.  This was also the first phone which I did any amount of text messaging with, and found the predictive T9 input to be fairly usable.  I also found the alarm clock to be invaluable when traveling – hotel alarm clocks can be challenging when you’re jet lagged.

I probably would still be using this phone had the battery life not degraded to the point where it needed charging daily to be reliable at all.  It was far too common to hear the sad ‘dee doop’ Nokia low battery sound from my pocket.

While the 6585 didn’t offer a lot of whiz bang features, it did work well as a phone.  The PC connectivity is something I can’t imagine not having now.   My new phone is another Nokia, more on that in a future post.