When I initially planned my upgrade to a Core I3 system I was going to re-use my existing mid-tower case.  I knew I needed a larger (and more modern) power supply, but assumed wrongly that the new motherboard would match up.  The plan changed when I realized that the front mounted USB connectors and power button were not going to match up to the new motherboard without some surgery.

Having already invested in a new power supply, I decided to pick up just a case.  In hindsight I could have probably found a good deal on a case + power supply.  This post was inspired by the fact that I really couldn’t find any reviews of the case I did select: CoolerMaster Elite 335 – currently $42.99.  There was a review of the CoolerMaster Elite 330 which is a very similar case.

Summary: After using this case for some time I’m quite happy with it, especially given the price.  There are some minor improvements that could be made, but you get a nice looking case with a useful feature set and high level of compatibility.

Read on for a full review..

Pretty much straight from the CoolerMaster website.  The Elite 335 is a mini-tower that accommodates micro-ATX and ATX motherboards. With space for a 120mm front fan, and an included 120mm rear fan.  A meshed front panel maximizes airflow front to back, with a washable front air filter.  Front mounted USBx2 and audio jacks. Tool free design.

Let’s take a look at the front and back of the case. 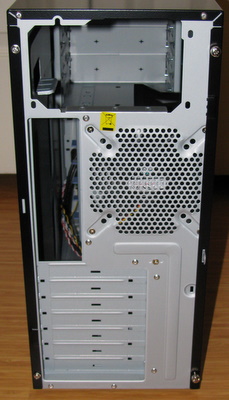 I had looked at a few bottom mount power supply designs, but in the end decided that a top mount power supply would keep the fan count down in the case and avoided any issues with the fan on the bottom of the power supply (potential solution is to mount it upside-down, but that has other airflow issues too).  The rear fan is the included one and comes pre-mounted.  You can also see the 7 expansion slots on the back.

The front of the case is fairly simple, and the air filter helps block a direct view through the mesh into the interior.  When running the power button is illuminated with a blue led.  You can see the dual USB front mount ports, and the headphone/mic plugs.  There is an optional punch out for 1394 firewire on the front.  It was nice to see the USB ports spread far enough apart that large usb keys would not interfere with each other.  There are four 5.25 bays exposed in the front, the mesh covers clip in to the case and can be easily popped out with a little care. 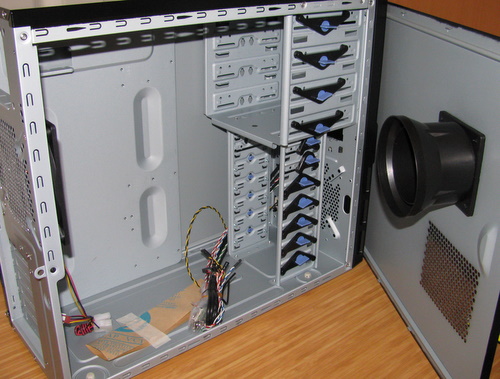 Inside the case we see the “tool free” drive mounting – this works fairly well but does require that you remove both side panels.  The side that is shown open in the photo above has thumb screws, the other side does not.  This is a minor fail on the tool free description.  You can also see the CPU duct (black cylinder) – this is intended to deliver cool air more directly to the CPU heatsink.  There is also venting on the side of the case approximately where you would expect a video card to be mounted on the motherboard.

There is plenty of room for drives – seven 3.5″ bays in addition to the four 5.25 bays.  One missing feature is support for 2.5″ drives (support for SSD), but there are always adapters so this isn’t a big deal.

I will mention here that the side panel sheet metal is very thin.  Compared to some of the ‘full metal’ retro cases I’ve had, laughably thin.  The construction of the case is quite good – and once assembled it does not feel cheap.  I didn’t notice any sharp edges inside the case, but I didn’t go looking to cut myself on purpose either.

I’m not entirely sold on the value of the CPU duct.  It partially blocks both the rear mounted 120mm fan, and the power supply bottom mounted fan.  You could remove it quite simply, but I’ve left it on. 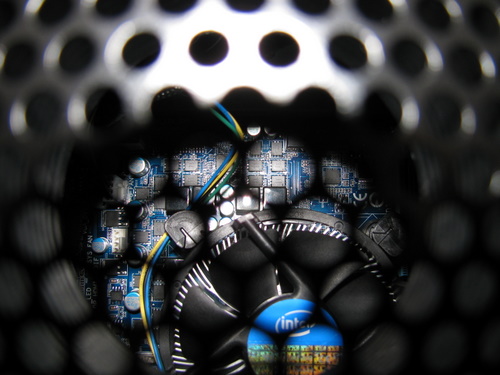 This is a picture taken looking down through the CPU duct from outside the case.  You can see that the alignment to my CPU/heatsink isn’t great.  Still, I’ve had no problems with overheating and generally the system runs fairly quite (but not silent).

One of the key elements that led me to this case was the compatibility of the included wiring harness and my new motherboard. 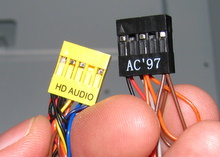 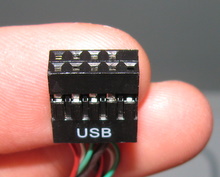 The case supports both HD Audio as well as AC’97 (standard) audio.  You can simply select the correct plug and connect it to your motherboard, the external headphone/mic connections remain the same.  The front mount USB connector is standard and should be compatible with modern systems. 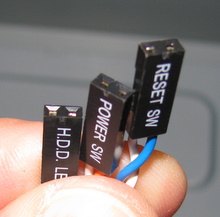 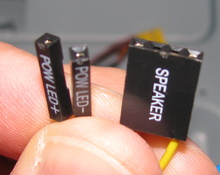 The HDD, Power and Reset switches are all 2 pin connectors.  The power LED is split into two single connectors, and the speaker is the standard 4 pin sized connector.  Overall this case should be compatible with a wide range of motherboards given the connector choices that have been made. 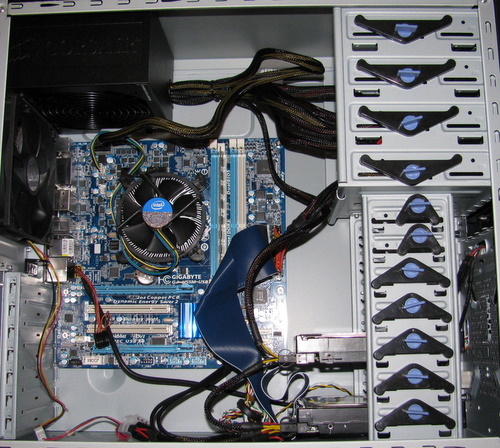 Pictured above is the mostly complete install (no DVD drive as shown).  There is plenty of room to work inside of the case.

Where the Elite 335 could be improved: CPU duct could be better positioned for this motherboard.  Included IDE cable could have been a ’rounded’ one.  Thumb screws for both side panels.

Overall I’m quite happy with this case.  You get a well put together product for a very reasonable price.