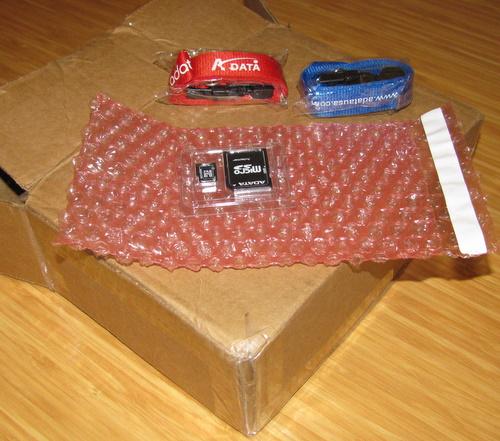 Last march when I got a G1 it came with a 1Gb microsd card. That’s enough for some apps and the usual kind of data you might want to carry around, but is isn’t enough if you want music and video (enough to keep you entertained on a cross continent airplane ride). At the time 16Gb cards seemed too expensive, but 8Gb was a nice sweet spot – for under $30 I could get a class 6 card from ADATA (the price has dropped in half since then).

This card worked reliably for me until things went wrong in early January of this year. Luckily I have a couple of 1Gb cards around that I could swap in as substitutes.  A couple of days later after drooling over 16Gb cards which are now reasonably cheap (if you drop to class 4) I realized that ADATA offers a lifetime warranty. There didn’t seem to be any sensible manner to claim this warranty, but I filled in the web based form to get some technical support. A few days went by, but then I got an email back.

The email was quite helpful. It was somewhat a form letter, but pointed me at the SD Formatter tool which in theory knows how to properly format an SD card. I had already tried multiple readers / machines to validate it was really a problem, but I gave the official tool a shot anyways. The same email contained a form document file that I needed to complete and send in to get an RMA #.

It took me a couple of days to get around to filling in the form, but the response with an RMA # was fairly prompt.  I sent off the card (cost me $2.88 postage – but it was well padded) and figured I’d see what happened. Well, today a rather large box (pictured at top of post) arrived. In it was a new card and two ADATA lanyards. Sweet, and I thought I had excessively packaged the card on return.

ADATA is one of the lower cost brands, yet from what I’ve read in various forums those with ADATA cards haven’t had more problems than any other brand. When the card failed, I was planning to just abandon an avoid ADATA in the future – the quality of the customer service (and the warranty) has me sold on ADATA being a good brand to buy. I will without hesitation buy ADATA again, and I’ll recommend it to others.

[Update: June 7, 2011 – I’m no longer using this ADATA card. The replacement started to exhibit strange behaviour in my phone – I replaced it with a 16Gb class 4 Patriot card. Not sure at this point if I’d recommend the ADATA brand]