It has been some time since I got a TED 5000 unit (Nov 2009) – being able to visualize the whole house energy usage is pretty neat, and a nice motivator to see what you can do to save energy.  A while back it seems my TED had gotten stuck and was no longer reporting any usage. 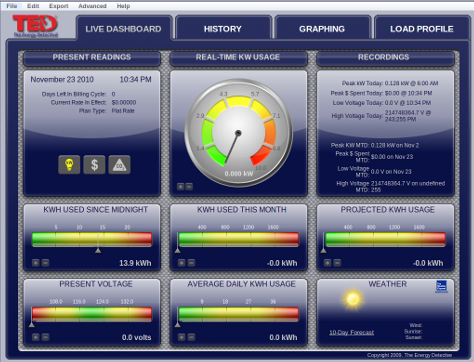 Now this type of problem has happened before, so I wasn’t too surprised. I don’t check it regularly (my attention to it tends to be bursty) so it seems like every second time I go to poke at it, something is amiss and there is inevitably another firmware update available too.

The current versions are:

The upgrade instructions are clear and easy to follow. However, unlike previous problems a firmware update/reboot/power-cycle has not magically fixed the problem. Guess it’s time to poke around inside my electrical panel [warning – this can be fatal if you don’t know what you’re doing] and see if something is wrong.

There is a fairly good troubleshooting guide available, in my case it seems working through step 4 was was I needed to do. Finding out what was wrong was pretty easy, the red MTU wire was lose in the panel (Rant: why I don’t like having random people doing work in my house! This mistake was related to some renovations we had done).  Once I knew what was wrong with the hardware setup, it was easy to fix.

Then I noticed the new firmware seems to have some problem, here is the resulting graph: 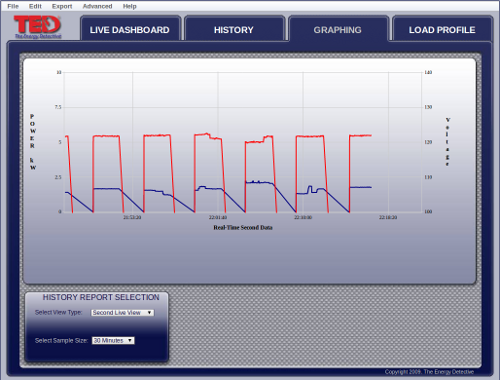 After some further software / network diagnosis it seems that the gateway (webserver) is hanging up every once in a while. It appeared to be alive and responding for 140 seconds, followed by a 170 second period of failure. Looking at the graph, the red (voltage) square wave represents the alive (120V) dead (zero) pattern.

Ok, no problem let me just push the older firmware back on via the web interface. Bad idea – as the update took a bit longer than the 140 second window, and I managed to get the device into a non-responsive state. Now what?

Well, after some head scratching it occurred to me to download the installer program. This is a java based program, but thankfully it was able to find and restore my TED 5000. There were plenty of somewhat scary java error output messages on the console, but it did succeed after some amount of time. I also performed a full reset at one point – this too may have helped the recovery. So yes, I’m guilty of a bit of a hammer approach here – I’m just glad my TED is back to working. I will treat firmware updates with a bit more caution in the future.

Which may have bugs, but it seems to be working ok for me at the moment (at least my graphs are coming out ok).

There is a support forum which is somewhat helpful, but didn’t give me a great sense of comfort. There are a lot of very unhappy customers. The TED 5000 device is a very useful device, but has several technical problems.

External events can cause havoc too: Installing a new electronic device (or halogen light) may cause noise on the power line such that you disrupt power line communication. If you are using weather updates, there is an external web based weather service which needs to be reachable (and providing the service).

I keep meaning to cook up some RRDTool based graphs to track my usage as I really don’t like the built in TED web graphs all that much. There are also some nice DIY solutions out there for whole house power monitoring now.

I still like having the TED 5000, but I’m not sure I’d recommend it to people due to some of the problems. I’d love to see a simpler product that just provided the data stream and used a pogoplug or similar to handle the fancy graphing using an open source stack.