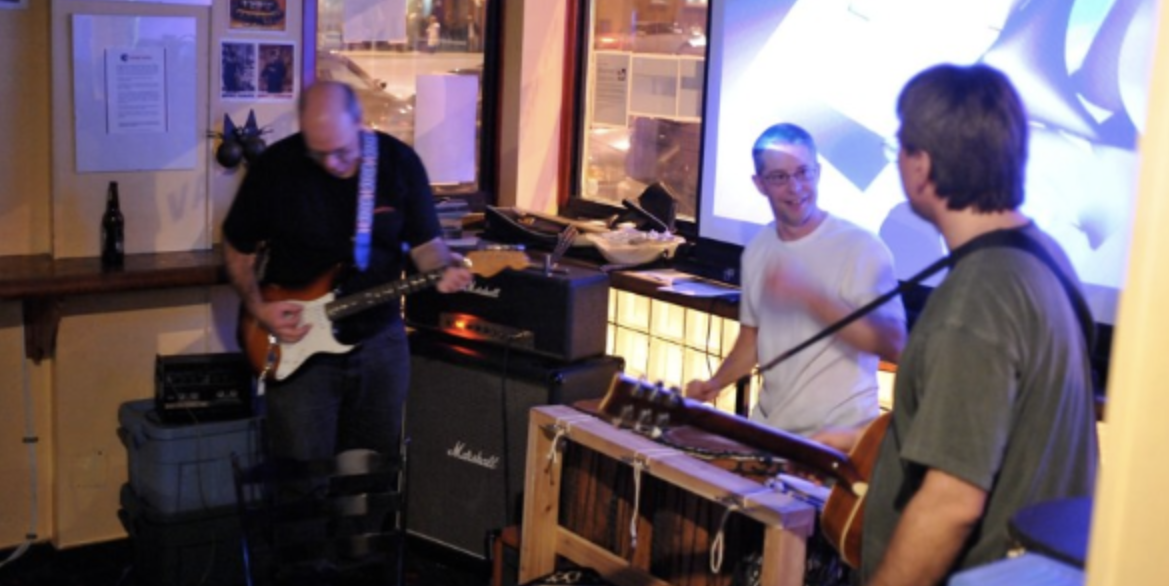 I’ve just returned from tonights show.  Its the first time I’ve seen them live since Ken has joined on drums.  Steve and Norm had a great sound, but now with drumming mixed in its really amazing.  If you want to get a sense for what the trio sounds like check out India Minor available from Ken’s site.  There is also plenty more linked from their old(?) homepage but it seems to be mostly older material without drumming included.  The new butterflies-and-zebras.com seems to have a mix of stuff.

They’ll be playing live again on  Thursday June 19th at the Avant-Garde Bar, 135 1/2 Besserer St.  Tonights cover was $5 and the volume, while loud – wasn’t such that I needed to break out the earplugs.  Very enjoyable.

There are several descriptions of what the sound of B&Z is classified as, but the set of labels that fits best for me is Experimental / Ambient / Psychedelic.  With two guitarists and a strong Hendrix influence you can guess where things are headed, however the recently added drumming adds a new dimension to the sound.  It was clear in the live performance that the trio were working well together, exploring the sound scape they were creating.  It seemed like each of them were striving for perfection in the details of their play while seeking musical synergy with the others.  For me personally, I enjoy the depth of the music they are creating and the sense of freedom they invoke in the listener.  Thanks guys – nice stuff.

My iPod stock headphones (the newer sleek version) sound pretty good. However, on a recent airplane trip it was obvious that I needed a better solution that cranking my iPod to max volume to hear the movie I was watching.

Most of the time I tend to listen to music at very reasonable volume levels, loud enough to block the background hum in the office – but not so loud I won’t hear the phone or someone talking to me. Once you’ve sunk enough cash into really nice sound equipment (home theater), you start to think seriously about protecting your ability to enjoy it over the long term.  Thus, earplugs are my friend at rock concerts, club events (the few I still go to) and hockey games.  In my youth I did enough damage to my hearing that I’d rather avoid losing it entirely later on in life.

Initially I was looking for active noise cancelling headsets, but their relative cost and the mixed results people have had resulted in my looking at some of the in ear canal headphones that provided passive noise reduction (they are effectively ear plugs with speakers).  Several of my friends have the Bose system and swear by it, so I suspect if you can talk yourself into the cost and the ‘big can’ style is ok then it is a good solution.

After digging around the web, I came across the Skullcandy Ink’d ear buds.  These seem to fit my requirements of in ear headphones, with some amount of noise blocking – but the real thing that sealed the deal was the cost: $13 (The Source was having a 1/2 price scale).  It turns out BestBuy also carries these and they are often on sale for $15.

One negative is that the earphones are not marked left and right.  I read somewhere, and it seems to be true from my listening, that if you look at where the earphone wires join up, there is a small plastic block with skullcandy written on it.  The words on the plastic block are on the front, so if you follow the wires up – you can figure out left and right.  Some users have sorted out left and right, then marked one with a dab of nail polish – I may do the same at one point, but these will mostly get used on airplanes where fidelity is already somewhat compromised.

Compared the to stock earphones, I noticed immediately that I could hear a background hiss when I plugged them into my iPod.  Checking with some other headphones I have, I believe that this background hiss is actually being masked by the stock headphones.  This is actually annoying enough that I would not want to use these at the office or any relatively quiet listening environment.

On the positive side, these are great on an airplane.  They work almost as well as earplugs, but let me listen to music at a much more reasonable volume level (still louder than I would in a quiet environment).  You know you’re still on a plane, but even with the music off – they provide a reasonable amount of sound reduction.  The bass is actually pretty good as well – much better than the stock ear buds.

Some reviews of the Ink’d complained about fit, and squeeky noises from the plastic inserts.  I haven’t really experienced any problems with them at all.  However, at one point I may try the hack of using a leather punch to modify a foam earplug to fit these as a potential upgrade.

Overall, I’d have to consider myself very pleased with the purchase.  For a very modest price, I got myself what I consider a great set of headphones for airplane travel.

Calling this a review might be a bit of an overstatement, I haven’t evaluated the player in depth but I’ve got a fairly long list of notes now on my impression of this player and I’ve had a chance to sit down an enjoy a few movies so far. If you are looking for a real review, the OppoDigital site points at a number of reviews.

The Oppo 980 is a standard definition player, it only supports the regular DVD format. While it supports up-conversion, it is not a high definition player. My purchasing criteria was pretty straight forward: HDMI support, up-conversion to 1080p, high quality playback. The Oppo DVD players have a strong following in the online community and are generally regarded as great value.

I did consider the Oppo 981 which has the Faroudja DCDi chip in it. The 981 is slightly more expensive, but with DCDi you will get better de-interlacing. Since standard DVDs are actually stored in an interlaced format, the quality of the de-interlacing can be important. DCDi does wonders when you have video content (vs. film) – video content is encoded in 2:2 pulldown whereas film is 2:3 pulldown (for details on this read about telecine for the basics). Since my primary viewing is properly encoded films on DVD, I wasn’t going to get a lot of benefit from DCDi in the 981. Additionally, there is a bandwidth problem in the implementation of the DCDi chip which in some scenes can cause additional macroblocking effects. If I watched a lot of TV series or material that was video (vs. film) based my decision might have been different.

A few bonus features that the 980 has: PAL support; USB2.0 connectivity; Customizable background screen; and support for the Divx Home Theater Profile. The PAL support came in handy, allowing me to use the PAL encoded setup DVD that the HCFR team has put together. This wasn’t critical as I have other calibration DVDs that work fine. The USB2.0 connection accepts thumb drives with .jpg files and will show them as a slide show. You can also put video or music files and play them back. You can grab an image from a DVD (or .jpg) and use it as your custom background – this is pretty cool.

The image (.jpg) display feature claims to have a high definition playback mode, but apparently this only works for 1080i output. Otherwise the image is internally scaled to 640×480 and then scaled to your output resolution. Additionally, there is a firmware problem that results in the image feature not using 100% of the output resolution – this results in a window boxing effect. Did I mention that the firmware can be easily upgraded? To check your firmware version: power on with no disc inserted and press the OSD button – I’m running with the latest DV980H-0B-0903.

There are some cool tricks that the Oppo supports. The first useful one is something called “Direct Play” – this will allow you to skip most of the warnings, previews, etc. at the start of a disc. As soon as the DVD will allow, press STOP and then press MENU. This has the odd side effect of dumping you into the middle of the menu system, but it can be a time saver. I should also note that it doesn’t always work.

The other noteworthy trick is the ability to change the region of the player, including making it region free. If you require this (I don’t) then a quick search on the net should uncover the sequence.

The packaging of the player was very nice. The manual leaves a little to be desired, but most people don’t even read it so this isn’t a big loss.  A 1m HDMI cable is included, too short for my needs, but useful for most people and nice that it was included in the cost of the player. The power cord was a bit wimpy, and in my case – not long enough (but my setup is a bit weird). The connector is a standard IEC (same as your desktop PC) so I had a longer one lying around.

I find that the remote control isn’t very powerful, and angle that the IR sensor accepts is a little bit limiting. Generally I use a programmable remote which has a very strong IR output so this isn’t a big issue.

In terms of viewing impressions, the image looks great no complaints on that front. The lack of the DCDi is quite obvious if video based material is shown (some previews) but the film performance is flawless so far. The layer change is very, very fast. I have not yet noticed one layer change on this player.

The actual transport can be a bit noisy at times. This is usually moving around menus and at the very start of a chunk of video (after you select from the menu). I’ve never heard any noise from it during a movie, but it is louder than some DVD players when navigating menus.

In summary – I’m very pleased with the Oppo 980. It was more expensive than some of the other up-converting players, but the layer change speed alone is worth the extra cost. The possibility of firmware upgrades is very cool, and the .jpg support has been a nice bonus so far.

Looking forward: Oppo is likely to release a Bluray player in the future, so I’ll be sure to keep an eye open for that (but a PS3 is a more likely candidate). If you’re reading this and concerned about the DCDi issue – look for the soon to be released 983 which will have the ABT chipset in it, and is likely to be one of the best DVD players ever.