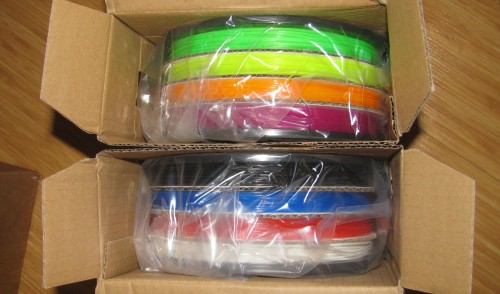 My printrbot simple shipped with 1lb of black PLA filament. This was great to get started, and it’s amazing how many prints I was able to do with so little plastic. I’ve still got probably 1/2 of the original black left, but I really wanted to do other colors.

I’d seen people coloring their filament using sharpies, and lately it seems that there are some very simple ways to do this with good success. I’ll probably try this next time I want to get some more colors and just buy a 1kg spool of natural PLA.

I had decided I wanted white, clear, and maybe one color (purple?). This sent me down the path of looking at the various places I could order from and trying to justify the shipping costs on top of the $20-$40 price per kg. Worse still, the printrbot store was actually out of stock on all but black when I had the burning desire to buy more filament.

Then I came across seacans.com – really nothing stood out about this vendor over others with the exception that they offered a 2kg rainbow pack for the price of 2kg of filament. Looking at the site today it seems they no longer carry this useful sampler of 8 colors, but they still have very good prices.

There are many options for filament – but my experience with seacans.com was positive. I would use them again. 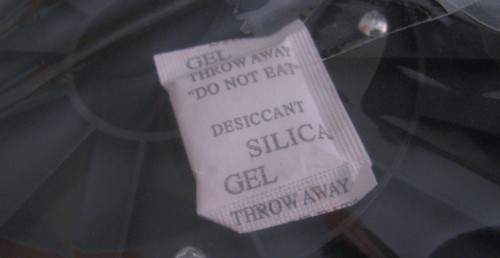 The shipment came double boxed. Each spool of filament was bagged in plastic with a desiccant pack. I’ve done quite a bit of printing with the new colors, and in general it’s been successful.

Measuring the thickness of the filament is interesting. The black that shipped with my Printrbot is 1.78mm. The rainbow pack from seacans.com varies across the colors: purple 1.72mm, orange 1.73mm, yellow 1.64mm, green 1.69mm, black 1.76mm, blue 1.69mm, red 1.70mm, and white 1.68mm. It is possible the size varies more across the length of the material. Since the Printrbot filament is not on a spool, I can easily test multiple locations over the entire length and it seems to be pretty consistent at 1.78mm.

With my prints – I haven’t noticed any big variations on the quality of the prints due to the thickness differences. With a 5% size difference you’d think it might show up more in the prints.

Initially I did have some trouble with the extruder gear grinding the filament down and failing to feed. I solved this with a fan (more on that in a future post). I’m not sure this can be simply attributed to the ‘cheap’ filament, but overall heat of the room (summer vs. winter) and feeding from a spool (more drag on the material).

If you can find a ‘rainbow’ pack, it’s worth a 30% premium over single color spools. I’ve had a lot of fun with the 7 new colors (I had black before). I also would suggest that cheap filament, while it may have some quality variation on size – is just fine for the hobby printer folks like myself.

I’d been with NCF as my internet provider for a long time, I’d even written up a review of the service. I still think it’s a good organization to support, but I can no longer recommend it as a good ISP to use. My recent experiences with them have led me to believe they do not have the technical skills available to assist their customers effectively, and they repeatedly failed to call me back as promised.

I had decided on Teksavvy based on success my friends have had, their overall reputation and my interactions with their sales and support staff answering my questions. I’m still on a DSL line, but now using 15/1 which is the fastest available to my home at the moment. I would have stayed with NCF but the upgrade cost from 6MB to the 15/1 speed was going to cost me $89.95 [this has recently changed to a $49.95] whereas the admin cost at Teksavvy was $50. I had picked April 21st as my switch-over date and set this up with the two providers.

This is when the disaster happened. We were over one week without internet service at home. Not fun. The big bad guy here is Bell, but it was handled very poorly by NCF staff.

The long story: I sent in the cancellation to NCF on March 31st. Set the date as Apr 21st. They have a form you submit to do this – however there is no email / indication that the form worked or was waiting to be processed. 24hrs later I called in to check if it was in queue, someone at the NCF office was able to tell me that it was indeed received.

I then signed up for Teksavvy starting as of the 21st.

Monday April 7th just before noon our home internet was disabled. No more DSL signal. A call to the NCF office was frustrating, I was told that the order to Bell was done correctly and the 21st was the right date. They failed to take any effective action to resolve my problem.

Tuesday April 8th. More calls to NCF, sounds now like Bell processed the disconnect order early. My only recourse? Sign up again with NCF, pay the admin fee and wait 5 business days to be reconnected. WTF?! Deep breathing. Call Teksavvy see if they can expedite my sign up with them, frustratingly I still have to wait the 5 days as that’s a Bell delay. Internet turn on day scheduled for the 15th.

Thursday April 9th. Call into NCF, talk to someone sort of useful at the office who is able to tell me the history of this screw up at NCF and what’s happened with Bell. He’s reasonable and says that they’ll have a refund to my account discussed. Promised to call me back with an update – still no call to date [as of this posting].

Sunday April 13th. Yes, we’re still without home internet. Called at 4pm by a Bell technician who is doing the outside work to connect us to DSL. I tell him my sob story about being out and is it possible we might have service today? He calls me back about an hour later and says that the outside work is all done, line looks good to go, but he was unable to get the Bell office to connect us early.  We need to wait for the Tuesday install date.

Tuesday April 15th, 3am. Dog wakes me up for some reason. He wants to go sit on the deck outside and look at the moon. Grr. Well, I’m up anyways – power cycle the DSL modem. 3:30am we’re on the internet again. 15/1 speed, still connecting through NCF [more evidence this was entirely Bell messing this up]. In the morning I setup my login / password to Teksavvy and switch over to that service entirely.

As usual, at the start of using a new service I end up talking with Teksavvy support multiple times. It hasn’t all been perfect, but in general I’ve had lots of straight answers from the people there and it’s easy to get to real technical people. 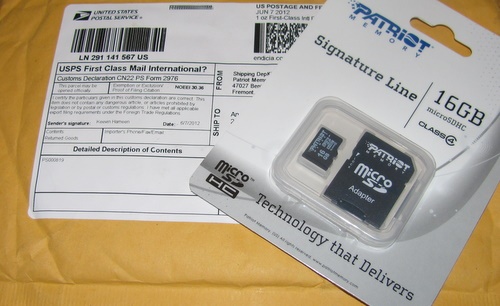 I’ve had various microSDHC cards from a handful of different vendors, as the prices on these plummet I’ve started to become more particular about the brand than the cost – I’m willing to spend a few dollars if I know I’ll get good service if I need it. In the past I’ve written about an ADATA microSDHC card and my positive experience with their RMA department. I’ve also had the occasion to return RAM to Kingston which was a very slick experience.

While the warranty on the ADATA card, and the cost at the time were clear winners – the ability for the card to sustain transfer performance on large files (movies) didn’t hold up to the rating claim of the card. It wasn’t terribly far off, but as the price of other brands came down I’ve tended to shy away from ADATA.

I’ve had good success with Kingston and that’s my go-to brand for memory at the moment, but Patriot is a very strong second. Recently my 16GB microSDHC card in my phone failed. The symptoms started with loss of files, then inability to recognize the card at all. As I poked at the bad card, I could intermittently format and write some data to it, but things were immediately corrupted or unreadable shortly after.

The RMA process was relatively straight forward. The website will direct you to contact support, who will reply via email and provide you a link to the RMA form with a case number. It was nice this was no hassle to get an RMA sorted out. The next step after the form is to send the bad card back. They provided this somewhat generic check list:

This was a bit of a bummer. A new 16Gb card is under $1 a Gb (including tax), tracking a package to the USA easily exceeds that cost. So I compromised and mailed it in a padded envelope with no tracking, the cost to me was $2.10.

The timeline on my RMA was as follows:

I really shouldn’t have had that huge delay between getting a RMA number and getting the card into the mail. The RMA is only valid for a 30 day window, I suspect I was pretty close to the cut off line or they use the post date – either way I was a little bit lucky. Beyond having a little bit of cross-border mail delay, this was a pretty smooth warranty request. I’ll buy Patriot again.