Until recently, the PS3 was one of the cheaper options for Blu-ray playback and it has high quality playback.  Today there are stand alone players which will match the quality of playback, but not the boot / menu speed the PS3.  Still, the PS3 goes beyond movies by providing game play and media center duties.

One of the drawbacks to the PS3 is integration with standard universal remote controls, not having an IR control story.  The official Sony PS3 remote uses the same bluetooth connectivity as the wireless game controllers.  To work around this there are several 3rd party solutions exist such as IR2BT, ps3toothfairy, Schmart and IR4PS3, I chose to go with the latter.

I first found out about the IR4PS3 option via remotecentral.com, a site I’ve often referenced ever since I invested in a Phillips Pronto TSU2000.  Having a complex audio/video setup is one thing, but it becomes a much bigger problem if my wife can’t make use of it – a fully programmable remote such as the Pronto makes the whole setup easy to use.  After reading the AVSForum thread on IR4PS3, I felt confident that it would be a good match for my setup.

The short version of the review is that ordering it was easy, it was shipped quickly, and works exactly as I would expect.  You do need to provide your own power supply, but the manual lists several low cost and easy to find options.  As it uses the bluetooth module from the Sony remote, compatibility with the PS3 firmware upgrades should be a non-issue.  I now can use my IR based universal remote control with the PS3.  Response time feel good, exactly as if the PS3 actually had IR support built in.  I would not hesitate to recommend it to others.

Read on for a full review with pictures..

END_OF_DOCUMENT_TOKEN_TO_BE_REPLACED 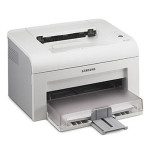 ink jet printer seemed to have an endless appetite for (expensive) ink cartridges.  It was time for a change, and while colour printing is nice – a lot of our printing needs were very basic.  At the time, staples.ca had multiple web coupons you could “stack” and cut a $199 printer down to $126, and there was a $30 mail in rebate on top of that.  I never got the mail in rebate due to the standard rebate avoidance techniques (by the time I found out what I needed months later, the box had gone into the trash).

The printer I bought was the Samsung ML-2010.  It was known to be easy to refill, and considering that a new toner cartridge was nearly $100 at the time – I knew I’d be going the DIY route when the time came.  A full 3 years later we still use this printer and it has been mostly trouble free.  The toner had finally gotten low enough that we needed to do something (taking the cartridge out and shaking it wasn’t helping much anymore).

I figured I’d be getting one of the toner refill kits from eBay, but which one?  I turned to redflagdeals.com and found this thread that pointed me at TonerKits.  While the thread was started back in 2004, but its still going strong at 47 pages with recent positive reports.  I purchased from TonerKits via eBay simply selected the right kit for my printer.  I paid $11.99 USD (7.99 + 4 shipping), but looking today – the same kit is $9.99 with free shipping.  The eBay transaction was quick, and smooth. 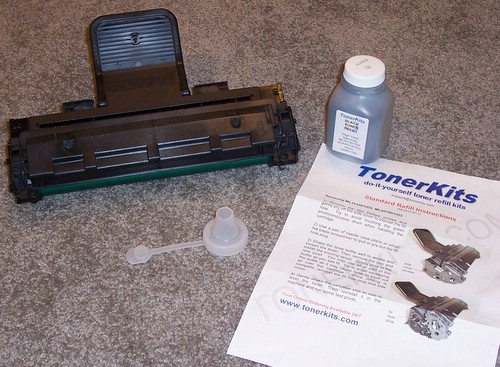 Pictured above is my toner cartridge and the 3 items I received from TonerKits.  The refill process was very simple. END_OF_DOCUMENT_TOKEN_TO_BE_REPLACED

I’ve previously talked about the SlimRIO project, but I finally got around to actually getting it properly setup and installed in the playroom downstairs.  I figure I should give back to the community and write up a short How-To article.